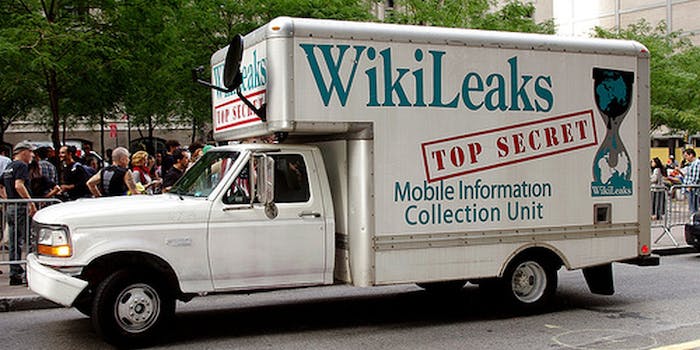 Who drives the WikiLeaks truck? We found him

Artist Clark Stoeckley, the owner of a truck with the WikiLeaks logo emblazoned on it, jokes he is the official truck driver for Occupy Wall Street.

“I deliver everything except laundry,” he told the Daily Dot in a phone interview.

Stoeckley describes himself as an “artivist,” a term he said he coined for his blend of satirical art and activism. The WikiLeaks Truck is his mobile art piece, and he’s driven it repeatedly up and down the East Coast, between Washington, DC, and New York City.

“I’m definitely not a hacker,” says Stoeckley. He’s clearly a WikiLeaks supporter and he sees himself as tangentially part of the group in that WikiLeaks is a volunteer organization “and I am a volunteer.”

The truck has not been officially sanctioned by the organization (if the organization even does such things). But by the same token, WikiLeaks has not reached to Stoeckley to tell him to stop using the name.  Stoeckley finds that encouraging.

The truck was purely Stoeckley’s idea and he painted his vehicle with the WikiLeaks name because he strongly believes that some sort of WikiLeaks symbol should be prevalent at the OWS movement.

In an interview with the site Wikileaks-movie.com, Stoeckley also described his truck as “part-prank,” though given the trouble the truck has caused him, it’s hard to know who is pranking whom here, or if the prank is more trouble than it’s worth.

Besides trouble with the law, the notoriety of the truck’s logo has led people to hurl abuse at Stoeckley.

“I’ve had people yell at me on occasion about [Wikileaks founder] Julian Assange, and I’ve had very conservative business men give me the finger,” Stoeckley said. “That’s usually as far as the debate goes.”

It’s not all bad; Stoeckley recalled the time a cab driver pulled up next to him to praise his efforts, saying “WikiLeaks is important all over the world, and I support you and the 99%!”

Formally named the “Wikileaks Top Secret Mobile Information Collection Unit,” Stoeckley said “driving it and parking it is my performance.”

The usefulness of the truck hasn’t escaped OWS protesters though, and Stoeckley’s truck is regularly used as a storage space, a transport vehicle for heavy objects like generators, and for shelter.

“I’ve also used it as a medic station for people suffering from hypothermia,” he said. In the future, Stoeckley hopes to turn it into a television, and “I’ve also wanted to use it as a stage for performances.”

Stoeckley also makes bullet-proof body armor and Guy Fawkes masks, which he sells to keep his truck up and running and in good condition. (Recently, a World Trade Center cement truck backed into his truck, and he had to replace a side door and windows.)

Together with Doctor Adventure, the two have expanded to make other “superhero armor” in an undisclosed studio space. Stoeckley is the painter, while Doctor Adventure, who is also a mechanic, makes body armor and prosthetics.

Stoeckley also claimed he has sidekicks and bodyguards. (We’re pretty sure he was joking.) Together, they make up a group called the “Art Superheroes.”

“Any person who has ridden in the truck with me is an art superhero,” Stoeckley told the Daily Dot.

And, added Stoeckley, the Daily Dot, by virtue of publishing this article, is now an art superhero, too.