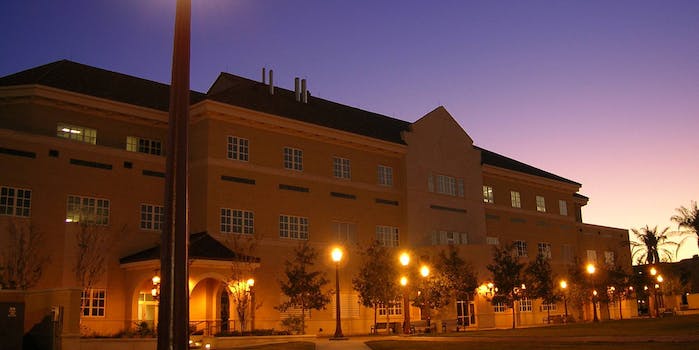 A network connection point was renamed as a racist slur on Tuesday night at Texas A&M University where prominent white nationalist Richard Spencer was holding a speaking event on campus.

Journalist Jeff Paul made the unexpected discovery as he was attending the venue and event, which raised tensions among students.

Found this when I went to connect to a wifi connection inside room for Alt Right speaker Richard Spencer at Texas A&M @CBSDFW pic.twitter.com/daV8oJhtJW

Thousands of protesters had gathered around the venue building to demonstrate against Spencer, who was invited to the university to speak by local white nationalist Preston Wiginton. Spencer made headlines recently when a video of one of his speeches went viral. In the clip he is seen leading chants of “Hail Trump!” while a roomful of white supremacists respond with Nazi salutes.

A&M, which rented out the venue to Wiginton, sought to distance itself in a statement ahead of the event while maintaining that free speech was a First Amendment right, “no matter how odious the views may be.”

“I find the views of the organizer—and the speaker he is apparently sponsoring—abhorrent and profoundly antithetical to everything I believe,” the school president Michael Young explained. “In my judgment, those views simply have no place in civilized dialogue and conversation… [but] barring a breach of contract and/or unresolvable safety concerns, we have no plans to prohibit the speaker from using the room he has rented.”

On the night, Spencer proved as provocative as expected. “At the end of the day, America belongs to white men,” he announced from the stage, to booing and hissing. Only a small group of far-right supporters applauded, a reported few dozen among the 400-strong attendees present.

Meanwhile, outside the main hall, riot police were forced to maintain a perimeter to keep demonstrators at bay despite what proved to be a peaceful protest.

Riot police push protestors out the door, leading to someone being reprimanded #BattLive pic.twitter.com/Eo5qU77t7e

From inside the Memorial Student Center at Texas A&M pic.twitter.com/NecTPV4flE