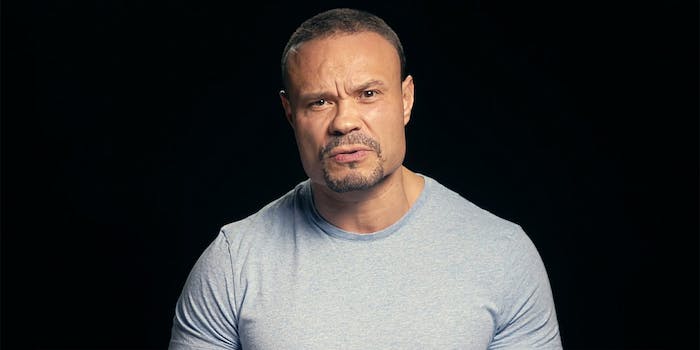 He is a podcasting freak of nature.

But now he’s dominating the right-wing Trump-related discourse. How’s that?

Who is Dan Bongino?

Bongino is now a radio host, prolific podcaster, and regular on the right-wing TV circuit, frequenting Fox News and NRATV. You can find him tag-teaming the attorney for Trayvon Martin’s family with Sean Hannity or analyzing the soulless, totalitarian left with Alex Jones.

Bongino often gets called to weigh in on topics related to law and order, such as mass shootings and police violence. Increasingly and very much true to form, Bogino is asked by the right-wing media to comment on issues way outside his area of expertise, such as the Russia investigation or immigration policy. The former NYPD cop has become a part of the seemingly endless stream of conservative personalities who earn their 15 minutes of fame by torching Obama or Hillary Clinton in a book, then are recycled by Fox News to spout out generic Republican talking points until the end of time.

Shortly after last year’s terrorist truck attack in New York City led to Trump calling for the end of the diversity visa lottery and chain migration, Bongino was interviewed on a Fox News segment.

“Listen to me: Our immigration policy is suicidal. And that is not hyperbolic. There is no—let me repeat this—there is no constitutional right to immigration,” said Bongino.

Is Dan Bongino a libertarian?

Though Bongino calls himself a libertarian and bills himself on his personal website as someone who is “debunking both liberal and Republican establishment rhetoric,” the New York City native is clearly in the tank for all things MAGA. Though he served in three presidential administrations, for Obama, George W. Bush, and Bill Clinton, the Obama years were when he grew truly disillusioned.

Bongino called the Obama administration “toxic” in an interview with the New York Post’s Page Six.

“That wasn’t necessarily the case with the Clintons, and I was pretty much enmeshed in Hillary’s Senate campaign. Although I disagreed with a lot of their political positions . . . I can’t tell you that they thought government was a weapon exclusively to intimidate their enemies. But this administration constantly seems to use government [as a weapon] because they are inexperienced with it — it’s like giving a kid a Bowie knife and saying, ‘Have fun.’ They gave this administration which has no experience the reins of government and they have just gone wild,” said Bongino.

Bongino puts out new episodes of his podcast, The Dan Bongino Show, daily, a staggering amount of content especially given that the average episode runs roughly an hour long. In it, he displays an admirable level of confidence in educating his listeners on topics he clearly just ran a perfunctory Google News search on the night before, like tax policy and federal budget cuts. No matter what the problem, Bongino’s inevitable diagnosis is always that it is the fault of Democrats and liberal America.

But his favorite topic of discussion is the Trump-Russia investigation and finding increasingly nonsensical ways of connecting it to Clinton and Obama. Every episode contains amazing leaps of logic.

In one recent episode, Bongino concluded that the Russian collusion was a set-up by Democrats to make the Republicans look bad.

Bongino latched on to Jonathan Winer, a State Department official who was friends with dossier author Christopher Steele, and was recently under investigation by the House Intelligence Committee. Winer, who worked in both the Clinton and Obama State departments, shared numerous reports by Steele on Russia with the State Department’s Russia desk, who found them useful.

Winer was also given a second dossier on Trump by Sidney Blumenthal, a Hillary Clinton confidant. A veteran MI6 agent sharing intelligence with the State Department shouldn’t raise any alarm bells (Britain and the United States have been sharing intelligence since World War II).

But according to Bongino, it was evidence that the Democrats were actually the ones who colluded with Russia, only to be played at the end. How exactly did he reach this conclusion? Breitbart recently reported that Winer’s former lobbying form signed disclosure forms to represent Russian oligarch Oleg Deripaska. Deripaska is already a person of interest in the Trump-Russia investigation due to his ties with Trump associate Paul Manafort, who he hired in 2006 to design a campaign to greatly benefit the Putin government

“One theory here is that (…the Democrats) worked with the Russians willingly…That the Clintons knew that they could take down Trump by going to the Russians for fake intel and that their go-to guy to coordinate the whole thing would be Deripaska.”

So Clinton’s path to victory was having Russian agents plant fake information, then hiring her own research team to find that fake information, and hoping it got out to the public. Bongino’s latest crackpot theory seems very unlikely.

When Bongino resigned in 2011, he made a long-shot bid at a U.S. Senate seat in Maryland. He lost. He then lost another election in 2014, this time for the House seat of Rep. John Delaney (D-Md.). In 2016, Bongino moved to Florida in order to see if the state held sunnier prospects for his political career. It didn’t. Bongino went on a profanity-laced tirade against a Politico reporter who questioned him about news that he lacked sufficient financial backing from his district. He ended up not even making it past the Republican primary in the Florida race, placing in third.

In spite of his failures, Bongino still managed to put out two other books. His latest screed, Protecting the President: An Inside Account of the Troubled Secret Service in an Era of Evolving Threats, looks at the various security challenges facing Secret Service agents.

But if you don’t want to spend the time or money on his books, you can learn everything you need to know about the man through his parody Twitter account:

Folks, what a positive upturn it has been having Donald Trump in charge. Can you imagine if it was Hillary?! What a downfall that would’ve been! Phew!