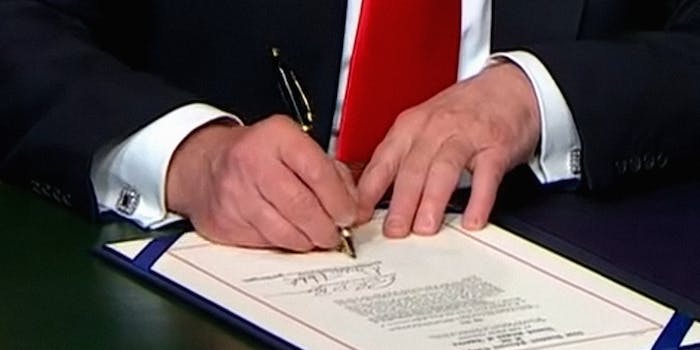 'Nobody has any idea what is going on.'

The White House has yet to publish an executive order banning refugees and citizens of seven different countries from entering the United States, nearly 24 hours after it was signed by President Donald Trump.

A vast amount of uncertainty remained on Saturday afternoon on the details of Trump’s executive order that included a ban on non-U.S. citizens and refugees from seven Muslim-majority countries entering the U.S. The White House has yet to publish the final executive order on Whitehouse.gov.

Reporters from various news outlets on Friday night began tweeting links to copies of the final executive order released by the White House press secretary that they scanned themselves.

Here's a copy of the full order, which still is not on the White House website: https://t.co/D0z28VZ6LA

Days before Trump signed the executive order on Friday, immigration attorneys had been advising clients—including those with green cards—from the seven countries that were banned not to travel outside the United States. But those attorneys were relying on leaks of the executive order that had been reported in the media.

Airports, airlines, and government agencies around the world are scrambling to interpret the instructions of a still yet-to-be-made-public ban on entry for citizens of Iran, Iraq, Libya, Somalia, Sudan, Syria, and Yemen. Flights bound to the U.S. from countries around the world began barring Iranians that did not have U.S. passports. Travel agents told AFP they had been instructed by Etihad Airways, Emirates, and Turkish Airlines not to sell U.S. tickets or to allow Iranians holding American visas to board U.S.-bound flights.

Many permanent residents of the United States who were nationals from the seven countries were unaware that the ban also applied to those with green cards.

The Department of Homeland Security defines “lawful permanent residents” as foreign nationals who have been granted the right to reside permanently in the United States.

Immigration attorneys and Muslim civil rights groups rushed to advise the thousands of families and individuals whose lives were impacted by Trump’s executive order.

“Our attorneys are currently advising Permanent Residents from these countries of the serious risks of travel. What our attorneys are advising is that under our current reading of the (…executive order) and without any additional guidance/interpretation at this time from the agencies, it appears that those individuals will be subject to the ban on admission (unless eligible for a “national interest” exception, the parameters of which are not yet clear either),” wrote Theresa Nahajzer of the Maggio-Kattar immigration law firm in an e-mail to the Daily Dot.

Ayoub also tweeted that he spoke to a family from Yemen with a 5-year old and a 6-year old—both U.S. citizens— and that were being turned away.

It has not slowed down. Just spoke to a family from Yemen, with two US Citizen children (5/6 y/o), who have been turned away. #MuslimBan

KTLA reported that Hameed Khalid Darweesh, a U.S. government employee for 10 years after the U.S. invaded Iraq, was released Saturday afternoon due to provisions in Trump’s order that allow the State and Homeland Security departments to admit individuals into the U.S. on a case-by-case basis.

The U.S. government employs many Iraqi citizens who perform work in the interest of U.S. national security, such as translating. An exception for them was not clearly outlined under the confines of the leaked executive order.

“Nobody has any idea what is going on,” a senior Homeland Security official tells NBC News https://t.co/jEOAaSU8dF

ACLU, CAIR, and other immigration lawyers have filed lawsuits on behalf of those effected by Trump’s visa ban.