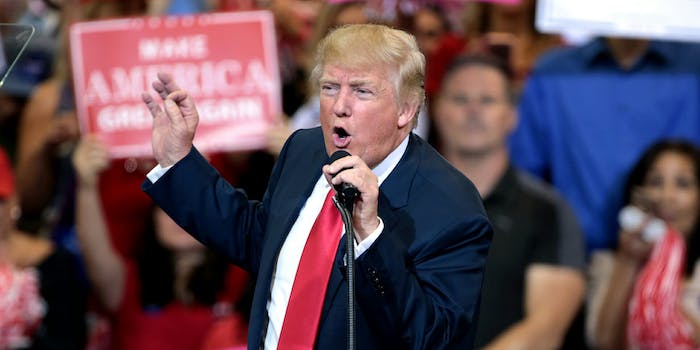 On Saturday, a white supremacist carried out a shooting at a synagogue in San Diego, killing one and injuring three. That night, to open a rally in Wisconsin, President Donald Trump condemned the attacks and the motivations behind them.

“We forcefully condemn the evil of anti-Semitism and hate. It must be defeated. We will all get to the bottom of it.”

But Trump has had a complicated relationship with white supremacists, white nationalists, and anti-Semites, who all supported his candidacy. The president himself has been accused of racism, anti-Semitism, and white nationalism—from his responses to tragedies to his immigration policies—throughout his campaign and the first two years of his presidency.

But in an article in the Washington Post about how the rising threat of white nationalist violence will be a component of the upcoming 2020 presidential race, the Trump administration said they had a plan to fight hatred and bigotry.

A White House official, who spoke on the condition of anonymity to discuss internal thinking, said Trump is committed to combating white supremacy and violence in all forms — but is not eager to re-litigate his response to Charlottesville and is unlikely to give a speech tackling the issue.

Given that Trump spent this week praising a former Confederate general, that quote about being “committed to combating white supremacy” doesn’t carry much weight. Especially, as people noticed, it was given anonymously.

"A White House official, who spoke on the condition of anonymity to discuss internal thinking, said Trump is committed to combating white supremacy and violence in all forms…'https://t.co/xXubov7eSf pic.twitter.com/ptwRlQv1sy

That a White House official would ask not to be named for a quote like this is somewhat normal, except that it’s a topic that should be easy to roundly and publicly denounce.

It says everything that a Trump official doesn’t want to use their name to oppose White Supremacy https://t.co/Yl9iguyjEb

You don’t need anonymity to oppose white supremacy, unless your campaign strategy is to turn out the vote…of white supremacists. https://t.co/PwfuEglBaP