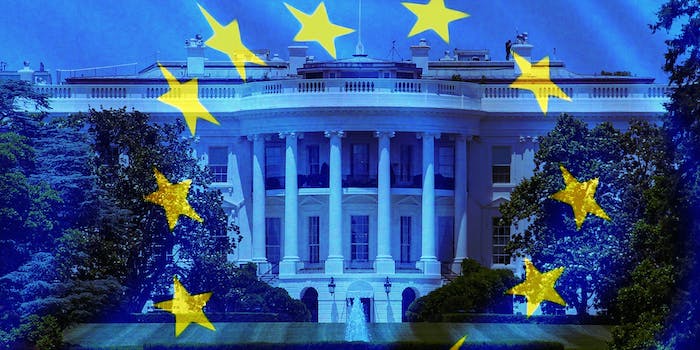 Europeans: They are people, too.

The White House is finally beginning to concede that the National Security Agency might need to start respecting the privacy of innocent citizens outside U.S. borders.

In a speech in Greece on Wednesday, U.S. Attorney General Eric Holder said that the Obama administration will encourage Congress to create a bill in which European Union citizens “would have the same right to seek judicial redress for intentional or willful disclosures of protected information, and for refusal to grant access or to rectify any errors in that information, as would a U.S. citizen under the Privacy Act,” the Hill reported.

As shown by NSA documents leaked by former systems analyst Edward Snowden in 2013, the agency has a phenomenal arsenal of abilities to track communications around the world, like acquiring a good chunk of raw Internet data and recording virtually every phone call in the Bahamas.

One major tactic officials have used quell domestic criticism by promising that most of them aren’t used en masse on Americans. In December, Obama himself said in an interview that U.S. law prohibits the NSA from most bulk surveillance on Americans, but that, “Outside of our borders, the NSA’s more aggressive,” and “not constrained by laws.”

That’s small comfort to the rest of the world, of course. The EU, in particular, has tough privacy laws that could butt up against those programs. Programs run by the NSA and its counterpart agency in the U.K., Government Communications Headquarters (GCHQ), may run afoul of those laws.

Holder’s comments also may just come from a practical economic standpoint. Ever since Snowden’s documents first revealed the NSA’s PRISM program, which allows the NSA to easily acquire data stored in the servers of American tech companies like Google and Facebook, pundits have speculated at the enormous potential fallout to U.S.-based cloud storage companies.