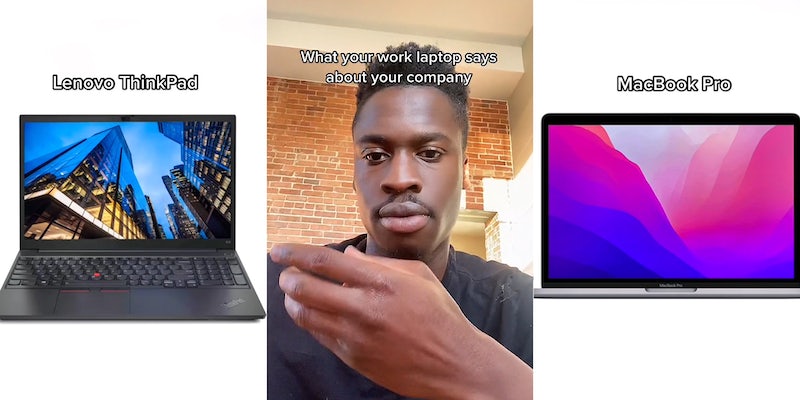 ‘I just started a new job and they gave me a DESKTOP’: Here’s what your work computer says about your company

A viral TikTok video about “what your work laptop says about your company” has sparked widespread debate about modern workplace culture.

The video, which has been seen more than 6.7 million times, was uploaded this month by @liljehu and jokingly outlines the meanings behind several different laptops.

According to @liljehu, who produces satirical content for those who work from home, the type of laptop you are by provided for your job can provide an insight into your company’s structure.

The video begins with @liljehu arguing that any worker with a Dell laptop should begin looking for a new job given that their employer likely has “cash flow issues.”

If you have been provided with a Lenovo Thinkpad, @liljehu adds, your employer only views “you as a number solely for your productivity.”

But if you have a MacBook Pro, your company “probably has some extra cash to burn and are spending it unwisely.”

The video was an instant hit, with thousands of commenters offering their opinion on @liljehu’s satirical interpretation.

Some users say they weren’t given a laptop at all.

“They told me to use my own laptop,” one user bemoaned.

“I just started a new job and they gave me a DESKTOP,” another added. “For a wfh job. I was so insulted lol.”

Others felt that the video’s description was impressively accurate.

“As far as I can tell, that’s SPOT ON,” one commenter wrote.

But many appeared to disagree as well.

“Well they sent me a Thinkpad and two additional monitors and a dock,” one TikToker said. “Seems good to me.”

“I work for a not for profit and I’m a nurse,” another responded. “The Dell is just good money management at this point.”

Although the video was only a parody, many users saw truth in the description. One user who claimed to own a Thinkpad said his company had gone as far as to block his access to social media.

“Not a single lie detected (not typed from my Thinkpad cause TikTok is blocked there for productivity reasons),” they said.

The topic was such a success that @liljehu has since released numerous other videos detailing his thoughts on other laptops: If you were given a desktop computer, your company is run by boomers. If it’s a Toshiba, you may be working for a company “on the black market.”

The Daily Dot reached out to @liljehu to inquire about his viral series but did not hear back.

Update Sept. 23, 5:18pm CT: “I was given a refurbished Dell laptop that would die within 5 mins of me disconnecting it from the charger,” @liljehu told the Daily Dot. “I compared it to the brand new MacBook Pro I was given at my new job and thought about how vastly different they are. I think the fact that so many people are reacting to the video speaks to how they’ve probably experienced the same things with regard to laptops that I have.”