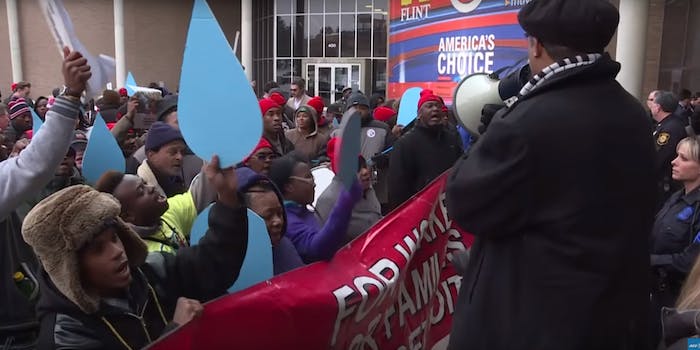 'Black and brown folks are dying more from environmental-related causes than they are from police brutality.'

Following a two-year struggle with contaminated water in Flint, Michigan, residents, activists, and supporters say it’s not just a health emergency, it’s one of the most high-profile incidents of “environmental racism” to date, due to its impact on marginalized communities of color.

The water supply switched from the Detroit system to the Flint River in April of 2014. Since then, the pressures have mounted on elected officials—like Michigan Gov. Rick Snyder—but according to some residents, no one’s been held accountable.

The crisis has gained national attention with news coverage, donations, benefit concerts, petitions, lawsuits, activism and social media campaigns like #FlintWaterCrisis, #JusticeForFlint and #FlintLivesMatter. Earlier this month, the civil rights organization Advancement Project continued the conversation with #BlackFlintRising, which included a town hall on how primarily low-income, marginalized black and Latino communities have been impacted by high levels of lead in the water—further defining what is environmental racism.

"My fear is that the pipes will get fixed but the systemic issues that caused this crisis will go unchanged." #BlackFlintRising

“We expect to see a continued conversation about why something called Black Flint Rising was necessary,” Fuller told the Daily Dot prior to the event. “We hope to continue and elevate conversations from community members of color and from allies in the fight for justice here in Flint to bring this even further into the national spotlight.”

Fuller added that she hopes to “build enough power to see some change for the people who live here that are dealing with these issues and face head on every single day.”

Based on Fuller’s experiences working with disenfranchised and underserved communities of color across the U.S., she said environmental racism is “any decision or policy related to quality of life, or any type of environmental decision that’s made by people in power, that results in a racial disadvantage.”

Dawn Demps, executive director at the Urban Center for Post-Secondary Access and Success (UPASS) and former resident advocating for the community, served on the panel for Black Flint Rising and has since expanded on how Flint has experienced environmental racism.

“Environmental racism would be neglect and abuse of the natural environment as well as the physical and the built environment,” Demps told the Daily Dot. “The racial piece [is] ignoring the care and the concern for those areas where people of color tend to live.”

“The corporations should have an obligation to come back and clean up what they left behind.”

Flint was home to the largest General Motors plant in the U.S. The city thrived until the company shrunk in the 1980s, according to CNN. Since then, Flint has experienced both deep economic depression and a degrading environment.

“We have largely poor people where it’s hard for them to advocate for themselves—whether it’s lack of knowledge or people tend to not listen to them,” she said. “They didn’t listen to Flint for almost two years when we were complaining about the water and the smell.”

Demps lived and worked in Flint for most of her life. Aside from the students she works with at UPASS, she has three children of her own. “It is hard because I have children of my own—outside of the children I work with. It’s hard when they ask you questions like, ‘Mommy, why does this area look this certain way, but this other area is entirely different?’”

“I had a baby [in 2014]—she’s 3 [years old] now. It is hard to not think about it, but I try to stay positive,” Demps said. “I try to focus on [that] we hopefully take on healthy eating habits, but what is the impact on her? I don’t think we could ever really know because you can’t know what they would have been; you only have what they are now.”

Demps says she is drained, but she’s steadily advocating for Flint’s kids and young people—although she feels the city hasn’t been as committed. “I believe that they deserve ‘beautiful’ whether they are poor or not—they deserve beauty, and they deserve health,” she said.

“[The city has] been committed to putting up a facade in Downtown [Flint] where people to go work … and they leave work right back out the city,” Demps added. “They never have to see the other side of Flint. They never have to experience what’s been left behind, the lack of investment and the lack of clean up in that part of town.”

“The corporations should have an obligation to come back and clean up what they left behind,” Demps said, “and make the natural and built environment as [beautiful] as it was before they came in and decided to dump their mess in the city.”

Brandi Collins, the campaign manager who oversees the media, economic, and environmental justice departments at racial activism group Color of Change, has been working on the ground with residents and organizers in Flint on projects like the Flint H2o website and app, created by Darnell Ishmel, which provides resources in needy areas of Flint; various collaborative petitions and campaigns with Flint groups demanding accountability; and discussions around better medical attention for residents.

“Black and brown folks are dying more from environmental-related causes than they are from police brutality.”

Color of Change was created by James Rucker and Van Jones due to the lack of both government and corporate responses to another environmental emergency, Hurricane Katrina, in the fall of 2005.

“The thing about Katrina is that—as with Flint—it was brought on by decades of irresponsible decision making and people in power—again—with no accountability to the communities that they serve,” Collins told the Daily Dot.

Recently, Newark, New Jersey, received national attention for elevated levels of lead in the water found in close to half of the city’s public schools. The city will test 17,000 students for lead poisoning at an unspecified date, according to WABC-TV in New York. Since the discovery, New York City launched a website to show lead levels across schools in all five boroughs, WPIX-TV reported.

Collins says racial justice and environmental justice have been deeply linked for decades. The United Church of Christ, for example, released a toxic wastes and race report in 1987. According to the Energy Justice Network, 68 percent of African-Americans live within 30 miles of coal factories. “You have extraordinarily high levels of asthma in black and brown communities that are explicitly brought on by environmental factors,” Collins said.

“Black and brown folks,” Collins said, “are dying more from environmental-related causes than they are from police brutality.”

Activists and residents have been calling for the accountability of government agencies and corporations for the conditions in Flint following the lack of response to the complaints of residents—including the Environmental Protection Agency and Gov. Snyder.

#BlackFlintRising: "The department of justice needs to come in and investigate." #JusticeForFlint

Collins called out the EPA’s lack of response and for its non-findings of discrimination in Flint, which have been credited to a lack of staff members at the EPA focused on environmental racism cases, as reported by the Public Integrity. “I don’t know if they have implicit bias training,” Collins said, “but there doesn’t seem to be an accepted codified checklist or understanding across the organization of what environmental injustice or environmental racism looks like.”

The EPA released tips to help Flint residents on how to manage the water crisis, but according to the Detroit Free Press, emails reveal that the EPA wasn’t too concerned with the city’s environmental emergency.

.@EPA will be on the ground until #Flint water system is back on track, making sure this never happens again. pic.twitter.com/RRtNEGXJPB

Snyder didn’t declare a state of emergency in Flint until Jan. 5, 2016. Before the state of emergency, the Detroit Free Press reported, residents were told that the water is fine to drink, despite community complaints in 2015. Meanwhile, Flint’s State Office Building reportedly arranged coolers of purified water for employees.

Snyder later released hundreds of emails from 2014 and 2015 related to how much knowledge he had of the water crisis.

The man-made disaster in Flint has a much deeper and complex history dating back before the switch of the water systems—but, as the truth behind the crisis is becoming visible, it’s clear that many state and federal agencies played a role in a now definitive form of injustice known as environmental racism.