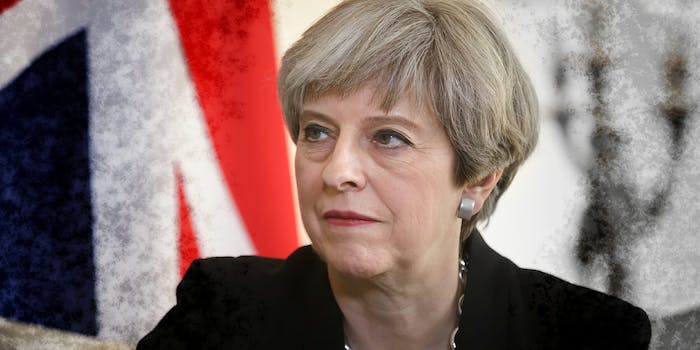 Photo via Drop of Light/Shutterstock (Licensed) Remix by Jason Reed

Meet the DUP, the far-right party that just got a big seat in U.K. politics

A history of corruption and violence are just a small part of what makes the DUP's newfound power so wild.

After a shocking United Kingdom snap election outcome that failed to win the Conservative Party a substantial majority in the country’s parliament, British Prime Minister Theresa May has been forced to strike a deal with a controversial Northern Irish political party in order to form a government.

The ultra-conservative Democratic Unionist Party (DUP) only won 10 seats, all in their base province of Northern Ireland. When the Conservatives only won 318 of the 326 parliamentary seats they needed for a majority in the House of Commons, this small party enthusiastically emerged as kingmaker. So, who are they?

The party, founded by a Protestant fundamentalist preacher named Ian Paisley at the height of Northern Ireland’s bloody and divisive sectarian conflict, has an intensely religious philosophy that informs its politics even today.

When acting as leader of the DUP, Paisley regularly denounced the Pope as the antichrist in rejection of the Roman Catholic church’s influence in the southern Irish Republic. Paisley also became associated with paramilitarism when he attempted to create a “defensive militia” in the early 1980s during the climaxing sectarian violence—over which U.S. State Department revoked Paisley’s U.S. visa.

In recent years, the party has used the province’s unique power arrangement to block abortion legislation and gay marriage via a veto, even after political approval was voted through. The DUP’s politicians have also been at the center of some serious corruption scandals involving property and the bias distribution of government contracts.

Just last year, despite a number of its most prominent politicians being climate change deniers, the party mismanaged a renewable energy subsidy program at a cost to the British taxpayer of £490,000,000. With no cap on the initiative, farmers were earning money by burning renewable boilers in empty cow sheds. The fallout from the scandal ultimately collapsed the Northern Irish local assembly.

The DUP monopoly on power in Northern Ireland exists primarily because of the party’s strong pro-union stance in the long debate over Northern Ireland’s constitutional status—not its economic or social policies or dodgy dealings.

The political spectrum in Northern Ireland is generally strung between British unionism and Irish nationalism, a constitutional debate over whether the island’s northern province should remain part of the U.K. or join with the Republic of Ireland to the south.

It’s over this constitutional question, more controversially, that the DUP was endorsed this election by a pro-British community group allegedly linked to a local terrorist organization—one that was responsible for more than 400 deaths during the sectarian conflict.

Understandably, then, it was with a lackluster and very brief statement that May on Friday announced her new government to the media upon returning to her official residence at 10 Downing Street in London from visiting Buckingham Palace.

“What the country needs more than ever is certainty, and having secured the largest number of votes and the greatest number of seats in the general election, it is clear that only the Conservative and Unionist party has the legitimacy and ability to provide that certainty by commanding a majority in the House of Commons,” she said.

Refusing to acknowledge the bitter Conservative loss, May said she would work with her “friends and allies” in the Democratic Unionist Party to “provide certainty and lead Britain forward.”

This is not what May had hoped for. The prime minister had wanted to increase her mandate in order to negotiate Britain’s exit from the European Union following the bitterly fought and closely decided ‘Brexit’ referendum in June 2016.

May’s Conservative government already had a slim majority in parliament and was halfway through its five-year term when she called this snap election. She was confident that she would strengthen her party’s authority, increase its hold on parliament and, in doing so, its ability to negotiate Brexit without real opposition.

The gamble, it’s clear to say, did not pay off. A huge surge in support from young voters across the country punished the Conservatives, as they instead backed Jeremy Corbyn’s left-wing Labour Party and its anti-austerity manifesto. Corbyn is now expected to lead a “rainbow coalition” of parties as an opposition within Westminster.

May, however, finds herself forced into the most awkward arrangement with a party not just at odds with her on progressive issues but also potentially on Brexit and public spending too.

Already, DUP leader Arlene Foster has indicated that her party will seek to leverage some concessions in exchange for their support in parliament and described the arrangement with the Conservatives as one of “confidence and supply.”

“I certainly think that there will be contact made over the weekend, but I think it’s too soon to talk about what we’re going to do. I think we need to wait and see,” Foster commented to the BBC.

At the end of this devastating election, the Conservative Party is weakened. May, rather than empowered to negotiate Brexit, finds herself in a frustrating and concessional position reminiscent of the one President Donald Trump and less hard-line Republican lawmakers face with the House Freedom Caucus. The tail, quite possibly, will wag the dog.