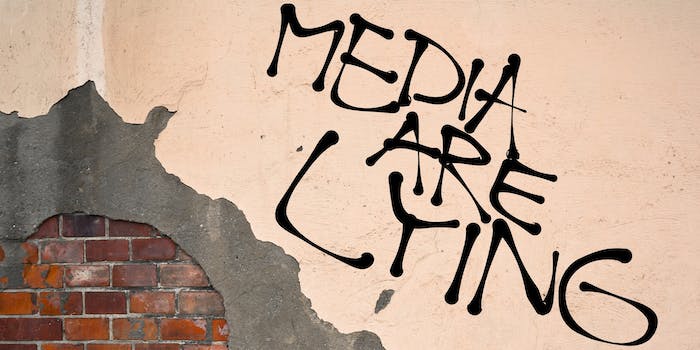 Who’s to blame for the spread of fake news?

One in seven people have shared a political news story knowing full well that it was fake.

One clear outcome of the 2016 U.S. election is growing awareness of the problem of “fake,” or patently false, news that spreads widely on social media. Politifact has deemed fake news the “lie of the year,” defining it as “made-up stuff, masterfully manipulated to look like credible journalistic reports that are easily spread online to large audiences willing to believe the fictions and spread the word.” The president, president-elect, and the pope have all weighed in on it, the latter likening the “sinful” act of creating false reports to eating feces. Now, a new report from Pew Research Center looks into how the average American views the phenomenon.

“There’s this erosion of this shared set of agreed-upon facts in American life, and the American public are noticing that,” report researcher Jesse Holcomb told Vocativ.

The Pew survey was conducted among over 1,000 adults over the age of 17 via telephone, the week of December 1, right before a man fired three shots into a Washington, D.C. pizzeria he believed held child sex slaves thanks to the proliferation of an Internet-based conspiracy theory now known as “pizzagate.” (One of the many people spreading this story was Michael Flynn Jr., a member of the Trump transition team. He was dismissed from his position on December 6.) So even prior to that, the majority of Americans felt that fake news was causing a great deal of confusion about basic current-event based facts and saw stories that they felt were completely made-up at least sometimes. Over half of the respondents also believed that they came across political news that was “not fully accurate” online often.

Whether or not people are actually able to make these distinctions was not addressed within the survey, but a fair amount of people believe that they can judge the truth. Just under 40 percent said that they are “very confident” in their radar for completely false content, while 15 percent said they’re either not very or not at all confident.

“One area that’s ripe for further consideration is the ability of Americans to recognize and respond to a variety of different kinds of news and information that exists along the spectrum of accurate to inaccurate,” Holcomb said. “It’s that in-between space that now, perhaps, poses some considerable challenges for news consumers.”

A lack of confidence is certainly valid: 16 percent of survey respondents said that they had shared a political news story with their online followers that they later found out was made up. Another 14 percent said that they shared a story they already knew was fake, doing so to either intentionally spread misinformation, “call out” stories they knew were fake, or for their own amusement.

When it comes to who should be blamed for these stories, we already know where Pope Francis stands, putting blame on their creator. Donald Trump has also publicly decried the source of what he apparently considers fake news, though the story in question was a CNN piece on his plans to work on “The Apprentice” while serving as president and CNN’s source material for this story was one of his top advisors, Kellyanne Conway. Pew’s researchers, however, focused on who—outside of the writers of false news reports—are seen as responsible.

The survey showed that people believe everyone’s a little responsible: members of the public, government figures, and social networking sites and search engines where fake news is spread. 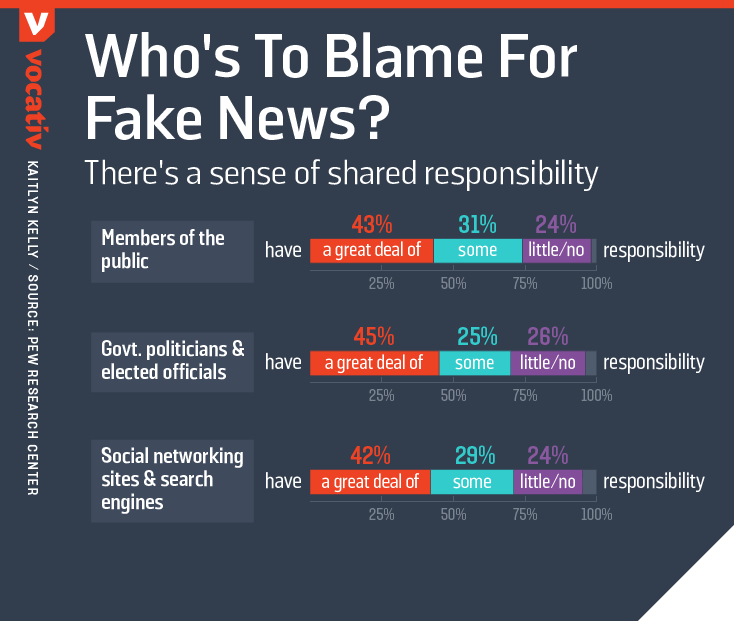 As these results reflect, the answer to fake news is also going to be complex and multi-faceted. In recent weeks, public pressure may have pushed Facebook and Google to begin addressing the issue on their platforms. It’s not clear by what means U.S. elected officials can address the proliferation of fake news, though some foreign leaders are actively working to come up with regulatory measures.

Perhaps it’s because of these limitations that survey respondents are putting the greatest degree of responsibility on themselves and their fellow Americans.

“[News consumers] now have this burden of having to be news literate in an increasingly complex news environment,” Holcomb said. “There’s a lot more information out there. We have a firehose now and that places even more responsibility of the consumer to discern fact from fiction and the grey area in between.”