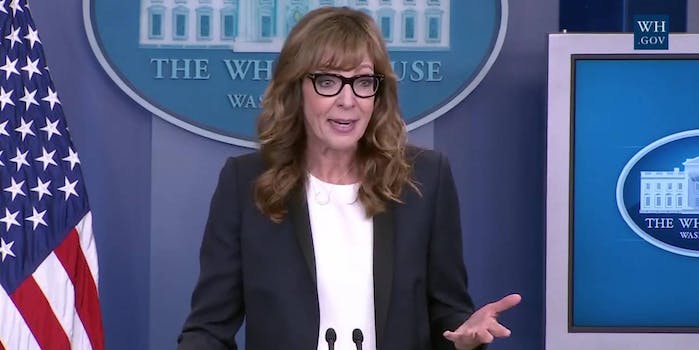 There were some in-jokes, but there was also a serious message.

If you’re a fan of The West Wing, it’s impossible to forget White House press secretary C.J. Cregg’s combative exchanges with the press corps in her briefing room. But on Friday, actress Allison Janney, who played Cregg on the NBC series, held a much more cordial surprise briefing in the real White House press room.

Janney was at the White House to raise awareness of an important healthcare issue, but first she tossed out a few West Wing references for all the fans in the briefing room and on the White House livestream who couldn’t believe they were seeing.

“Josh is out today,” she said, referring to Josh Earnest, the real press secretary, who would appear minutes later to take over. “He has—I believe it’s a root canal.” We see what she did there.

She also promised that at 5:30pm, she’d be “performing ‘The Jackal’ in my office for anyone who is interested or remembers or cares.” Oh, we remember. And we care.

.@AllisonBJanney
AKA CJ Cregg
AKA Bonnie on @MomCBS
drops by the White House press briefing. https://t.co/TK4NJ7TEyM

Allison Janney on opioid abuse: "This is a disease that can touch anybody and all of us can help reduce drug abuse." https://t.co/Vkjyubt6ea

Her in-jokes complete, Janney took the podium to discuss opioid abuse and promote the U.S. government’s substance-abuse awareness and treatment campaign. Her current TV project, the CBS sitcom Mom, features the topic prominently; she and co-star Anna Faris teamed up with the U.S. surgeon general in February for a drug-addiction PSA.

Standing at the world’s most powerful podium, Janney explained that the White House was honoring 10 “Champions of Change” “for their leadership in preventing prescription drug abuse and heroine use, and for increasing access to treatment, and for supporting their fellow Americans in recovery.”

She also noted that opioid abuse was “a disease that can touch anybody” and used her platform to urge people to support and pursue “evidence-based treatment, prevention, and recovery” strategies.