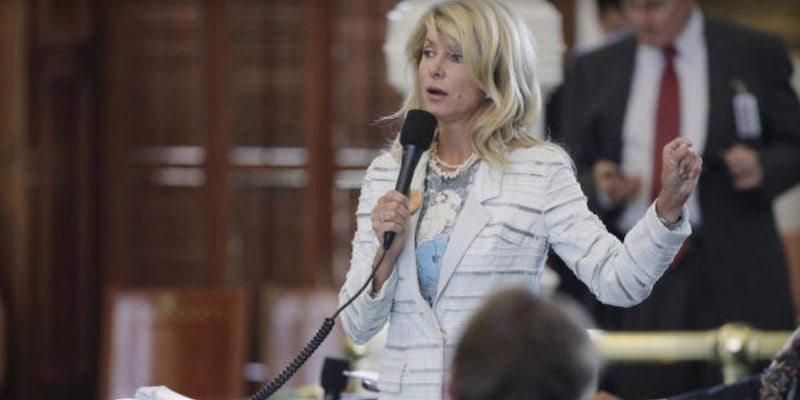 So why Wendy Davis, why Texas, and why now?

Last night, Texas state Senator Wendy Davis led a 13-hour filibuster that concluded with what may be the first time in history intense crowd-participation directly and immediately influenced legislation.

In other words, Davis was the lightning rod for the world’s first crowdsourced filibuster.

So why Wendy Davis, why Texas, and why now?

From the beginning, Davis sought crowd participation, as she urged her constituents and supporters to share their experiences with abortion via her website so that she could read public testimonials on the senate floor. Her pre-filibuster war cry, delivered via Twitter, was retweeted more than 9,000 times.

The leadership may not want to listen to TX women, but they will have to listen to me. I intend to filibuster this bill. #SB5 #txlege

Early yesterday morning, supporters on Tumblr sounded the alarm: Wendy needed more testimonials. And as they flowed in, so did curious bystanders who wondered what was going on. Word spread like wildfire. One Tumblr post explaining Davis’s situation garnered more than 66,000 reblogs Tuesday night and Wednesday morning. Even though early media coverage seemed more fixated on her pink-and-lime Mizuno kicks than what she was saying, the public had found a new hero in Wendy Davis.

Although Davis stood alone on the floor, the abortion rights movement had been in full swing for days. Yesterday, as the filibuster began, Lauren Rankin at PolicyMic described the intense standoff over SB5, a law which would force abortion clinics to close and ban all abortions after 20 weeks. The law, already unpopular with a majority of Texas voters, had been tabled once, and when Perry’s special session reopened it for debate, activists flooded the capitol for days. As early as Friday, the words “the people’s filibuster” had become a part of the language of the protest.

On early Monday morning, the hundreds of protesters filed into the Capitol Building wearing orange shirts reading “stand with Texas women” as debate continued. By Tuesday morning, hundreds had swelled to thousands, while “Texas women” had dwindled to just one woman: Davis.

The homegrown movement comes at a curious moment for American politics. While the Occupy movement, historic but ultimately fruitless, has been all but snuffed out in most cities, hacktivism has intensified, with members of Anonymous outing the identities of the Steubenville rapists, and whistleblowers like Edward Snowden and Bradley Manning taking one-man stands against government corruption.

Of course, the idea of “the lone individual” is a universally appealing metaphor, and paradoxically, the image of one person standing alone against an opposing power is often the quickest and surest way to catalyze wider support for the issue at hand. From Joan of Arc to the lone Tiananmen Square student, Davis was poised to enter a long line of maverick revolutionaries.

The political timing was also curiously fortuitous: The filibuster occurred on the same day that the Supreme Court released a debilitating ruling on the Voting Rights Act of 1965, formerly a civil rights watershed. It occurred the day before an expected ruling on DOMA, the federal ban against gay marriage. Already, many Americans were particularly attuned to a discussion about civil liberty.

But none of this would have mattered if, when Davis walked up to the podium yesterday morning, she had been anything less than she was: poised, calm, passionate, and carrying a personal history that made her just as invested in the argument as any of the testimonials she read.

A working teen who became a single mother at the age of 19, Davis put herself through community college before transferring to Texas Christian University, graduating first in her class, and then going on to study law at Harvard.

After practicing law for nine years, Davis was elected to the state Senate in 2008, defeating longtime Republican incumbent Kim Brimer. In 2011, Davis made headlines again when she singlehandedly filibustered legislation that underfunded Texas state schools by $4 billion.

The Texas Tribune called Davis’s 2011 filibuster “a watershed moment for a rising political star.” But others, including Governor Rick Perry, saw it as political grandstanding. “We don’t come here to be show horses,” he said in response to the filibuster. As he is expected to do in the wake of yesterday’s filibuster, Perry called for an immediate special session to pass the 2011 bill anyway.

Davis’ willingness to put herself on the line for her beliefs may have been the impetus for the firebombing of her office last year, when a paper bag full of molotov cocktails was chucked into her door. The incident resulted in no injuries, but it made Davis into an overnight buzzword, and drew national attention to an already contentious Texas up-and-comer.

“Wendy Davis is your new Khaleesi,” ran a constant refrain of the Internet last night, as throngs reacted to their discovery of Davis with instant hero worship and a Game of Thrones reference. (It means “queen.”)  As one Tumblr post, reblogged more than 9,000 times since last night, put it:

WENDY DAVIS, FIRST OF HER NAME, KHALEESI OF THE TEXAS PRAIRIE, BORN IN A STORM OF REPUBLICAN TEARS, BREAKER OF PATRIARCHY, MOTHER OF FREEDOM AND QUEEN OF OUR HEARTS

But ultimately, like any queen who knows she is nothing without her people, it was Davis’s call to her hypnotized public that pushed last night’s filibuster into the annals of history.

Above and beyond what Davis did, when she patiently stood and read testimonials, medical opinions, articles, and legislation for roughly 11 hours in the face of numerous GOP attempts to shut her down, was what her supporters did for her after Republican Lieutenant Governor David Dewhurst issued a third and final strike, effectively ending the filibuster. One Twitter user handed the Democrats a full 45 minutes, after she researched the rules of the Texas assembly and contacted the Democrats on the floor with information allowing them to effectively raise points of order and stall the vote.

And as the final minutes of the day ticked away, and the GOP tried to quickly usher in the vote, the crowd in the courtroom took over for Davis. Where earlier in the day they had screamed “Let her speak!,” now, as one, they raised a ruckus that created so much chaos on the floor the vote could not proceed until after midnight. It was, as Jezebel’s Katie Baker wrote, “the night a feminist army of loud angry bitches beat the GOP.”

What Dewhurst labeled “an unruly mob,” supporters of Davis—and, indeed, what occasionally seemed like the entire Internet—declared a sweeping victory for public voices in political debates.

And, perhaps most crucially, now we all care about Wendy Davis.