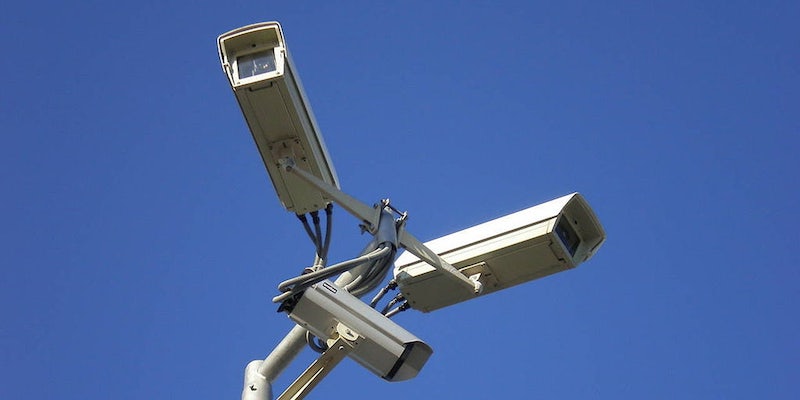 The easy and fun way to protest mass surveillance.

On Sunday, people around the world will wave at their login screen. They’ll be celebrating a holiday that protests the omnipresent dragnet of electronic surveillance that pervades cities across the globe.

The details of Worldwide Wave at Surveillance Day are fairly straightforward: As you go about your life on Sunday, every time you see a surveillance device, smile and wave—be it a security camera pointed at the sidewalk or when signing into your Facebook account.

Worldwide Wave at Surveillance Day is the brainchild of the pseudonymous privacy activist Zorbitor, who has been promoting the event annually for five years. Zorbitor’s efforts include this video about this year’s “celebration”:

The entire effort is couched in more than a bit of absurdity.

“[J]ust what is International Wave at Surveillance Day?” asked Zorbitor in a press release posted online Monday. “Is each wave on August 16th a way of alerting ‘watchers’ that ‘we’ are watching back? Is it a borderless, nonviolent statement of mutual awareness and solidarity under our burgeoning ‘Big Bother’ social reality? Or is it simply all things to all people?”

Writing for Wired about the 2012 event, cyberpunk author Bruce Sterling scoffed, “[Yeah, that ought] to impress ‘em. Especially when…[the cameras are] entirely automated and dependent on machine-vision algorithms.”

The idea was similarly written off last year, when Motherboard labeled it “the laziest protest ever.”

However, the act of publicly and repeatedly acknowledging electronic surveillance is neither entirely innocuous or nor is it completely worthless.

In a story published last year in the Daily Dot’s sister site, the Kernel, James Bridle embarked on his own variation of Wave at Surveillance Day. Birdle spent a day walking around central London, an area with surveillance cameras tucked into nearly every nook and cranny, taking photographs of every camera he noticed along the way. Over the course of a few hours, Bridle snapped shots of 427 cameras monitoring the streets along his planned loop around the city.

However, Bridle’s project was stopped short midway through when he was confronted by private security guards worried about the intentions of someone going through the city taking pictures of security cameras. The police were called. Birdle was told, “carrying a camera in the vicinity of Central London was grounds for suspicion,” and was threatened with arrest.

Outside of wearing masks in public to thwart facial recognition features, there isn’t much most people can do when it comes to security cameras. Yet electronic surveillance doesn’t just exist on the street, it’s also on your computer—where it can be stopped with the adoption of privacy-protecting tools instead of being forced to significantly and alter your daily routine.

In a conversation with the Daily Dot, Zorbitor suggested waving at your computer whenever you do something on the Internet that could be monitored by a third party, which is almost everything one does online.

Two years after a massive leak of top secret U.S. government documents by former National Security Agency contractor Edward Snowden revealed the widespread surveillance of the electronic communications of million of Americans, citizens remained concerned about their privacy. However, according to a recent survey conducted by Pew Research Center’s Internet and American Life Project, less then one-third of respondents have taken steps to “hide or shield their information from the government.”

Regardless of one’s position on the efficacy of government surveillance to reduce crime and prevent terrorist attacks, most actions a person could take to gird themselves against government snooping also serve to keep personal information safe from non-governmental hackers. It’s basically a win-win, so anything that gives everyday Internet users cause to think critically about their online footprint and how its security can be breached, is likely a positive for the overall health of the Web.

This year’s Wave At Surveillance Day happens in concert with a protest in support of controversial Wikileaks founder Julian Assange, who has been holed up in London’s Ecuadorian Embassy for three years. Assange has been hidden in the embassy to avoid extradition on sexual assault charges, which Assange insists are political retaliation for facilitating the release of troves of formerly secret government documents.