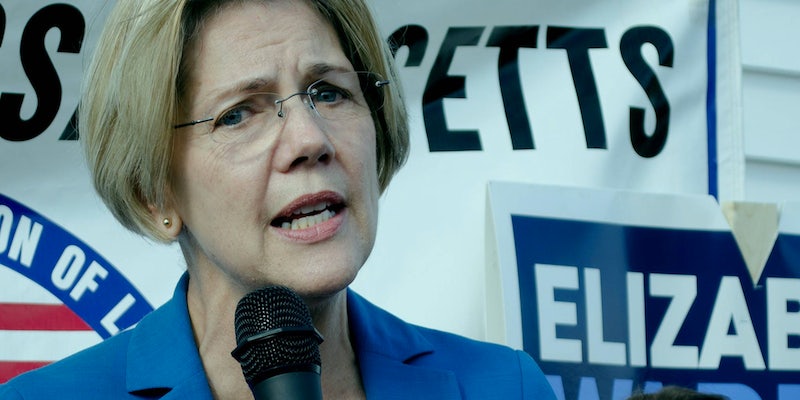 Warren had several pointed remarks about Comey being fired during a recent interview on CNN.

Sen. Elizabeth Warren (D-Mass.) is not pulling any punches when it comes to President Donald Trump‘s surprise firing of FBI Director James Comey.

During an interview with CNN on Wednesday afternoon, Warren was asked whether Comey’s firing may be a way for the Trump administration to halt progress on an investigation into the president’s campaign and its ties with Russia.

Warren said she thinks there is “no doubt” a that’s what is taking place.

“Given the timing, that the reason was Comey was fired was because Donald Trump wants to cut off any investigation into any connections that he has with his campaign and connections to the Russians,” she said.

Was James Comey's firing part of a cover-up? "I think that there's just no doubt," Sen. Elizabeth Warren says https://t.co/WNBHmd0hiQ

Later in the same interview, Warren said she wanted Deputy Attorney General Rod Rosenstein to testify before the Senate.

“Let’s put him under oath and let him explain directly to the members of the Judiciary Committee right here in the United States Senate exactly what it is that Director Comey asked for last week,” she said.

But Warren wasn’t done. The senator said it was “clear,” regardless of political party, that it was time to appoint a special prosecutor to investigate the ties between Russia and Trump’s campaign.

“This is a moment in history,” she said. “Donald Trump has tried to put himself above the law, and that’s not how it works in America. The way it works in America is that investigations are independent, no matter how powerful you are and that everyone has to follow the law.”

When asked how far Warren was “willing to go,” the senator said the situation has become a “serious national security issue.”

“I believe that everyone in Congress should also want to get to the bottom of this,” she said.

On Tuesday night, Warren spoke to MSNBC’s Chris Hayes and said there was a pattern of people investigating Trump including former Acting Attorney General Sally Yates, Preet Bahraha and Comey.

“You put those together and it’s pretty clear what’s going on here,” she said. “Donald Trump doesn’t want anyone coming anyplace close to an active investigation into the relationship between the Russians, the Trump campaign, and Donald Trump himself.”