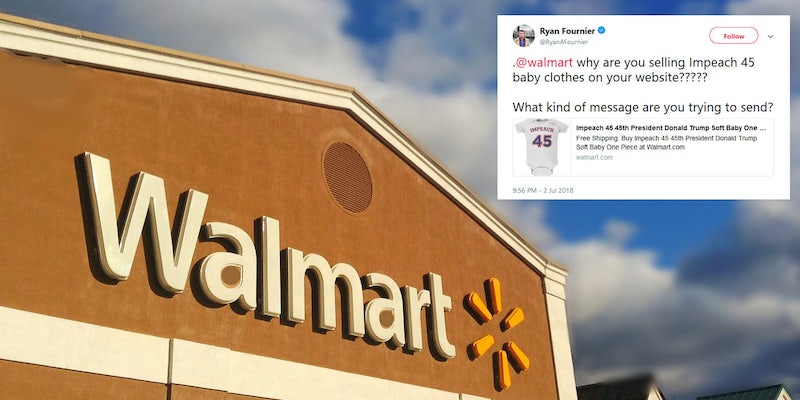 Walmart, the box-store retail giant, is coming under fire from supporters of President Donald Trump for selling clothing that caters to people who want to see the president impeached.

While a baby-sized one piece draw the attention of Ryan Fournier, the chairman of “Students for Trump,” Walmart is also getting flak for selling a number of “Impeach 45” clothing on its website.

“[email protected] why are you selling Impeach 45 baby clothes on your website????? What kind of message are you trying to send?” Fournier wrote on Monday, generating thousands of likes and retweets.

.@walmart why are you selling Impeach 45 baby clothes on your website?????

What kind of message are you trying to send? https://t.co/PwI4nCVAZx

Walmart did not immediately respond to a request for comment by the Daily Dot.

However, Fox News reports that a company called Old Glory sells the “Impeach 45” clothing on the retail giant’s website.

Besides the baby one piece that drew scrutiny from Fournier, the retail giant’s website has several options for people looking to show their distaste for the president.

Which of course, sparked even more outrage among Trump’s online supporters.

The Twitter mob rallied around a hashtag, #BoycottWalmart, to express their displeasure with the retail giant.

Looks like @Walmart is looking to join the far left and maybe needs good ol #boycottwalmart to make them think a little! https://t.co/aIMpv9D3Rc

#BoycottWalmart ! Disgraceful for allowing clothing companies to sell Impeach 45 on your website .

Not that I needed another reason to Boycott Walmart, but they just gave me one and solidified it for me.#BoycottWalmart #istandwithtrump pic.twitter.com/WJLPCBIs8u

If the #BoycottWalmart hashtag protest is like any number of the conservative-led boycott movements, it’s likely Walmart wont have to sweat this for very long.

Update 11:25am CT, July 4: In a statement to the Daily Dot, Walmart said the items were from a third-party seller, not the store, and that they’d be removing them.

“These items were sold by third party sellers on our open marketplace, and were not offered directly by Walmart. We’re removing these types of items pending review of our marketplace policies,” a Walmart spokesperson said.