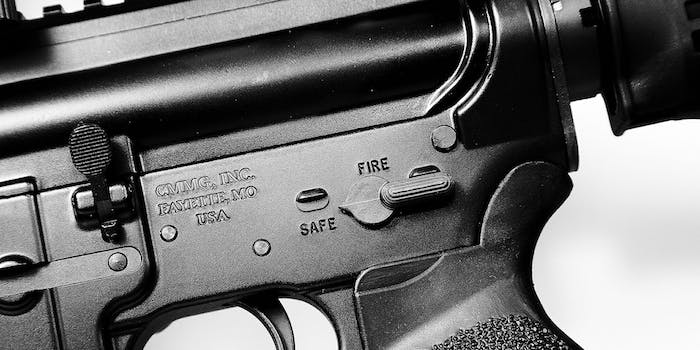 Photo via Robert Freiberger/Flickr (CC BY 2.0)

The announcement comes on the same day reporters were murdered in Virginia.

On Wednesday Walmart announced it would no longer sell the AR-15 rifle and other semi-automatic weapons, according to the Associated Press.

The announcement came on the same day as the latest high-profile gun murder in America, the on-air shooting of Virginia broadcast journalists Alison Parker and Adam Ward.

About one-third of Walmart’s 4,600 stores in the U.S. carry semi-automatics, the type of guns used in the mass killings at the theater in Aurora, Colorado, and at Sandy Hook Elementary School in Connecticut.

The decision was not made quickly, and did not seem to be related to the country’s handgun violence. Instead, as company spokesperson Kory Lundgren said, it was a matter of supply and demand.

“We wanted to make sure when customers are coming and looking to purchase those products, they see the products they want,” he said. “We see more business from hunters and people shooting clay.”

The guns will be removed from Walmart shelves in the next several weeks as the stores make the transition from summer merchandise to winter. Lundberg told AP that Walmart “had seen a decrease in sales of the particular models of guns, but declined to give specific sales numbers.”

The offerings of shotguns and hunting rifles would increase as the semi-autos are phased out, he said.

Walmart began reducing its stock of semi-automatics back in 2006. In June, CEO Douglas McMillon told CNN Money, “Our focus in terms of firearms should be hunters and people who shoot sporting clays, and things like that… So the types of rifles we sell, the types of ammunition we sell, should be curated for those things.”

Whether Walmart meant to contribute to the amelioration of gun violence or not, and whether or not it is making this decision partially as a response to Trinity Church’s shareholder lawsuit, is in a sense immaterial. Walmart is a leader in the retail space and what they do to some degree represents what America thinks. By that definition, what America thinks is that no one needs a Bushmaster to take down an elk. Or a child.

H/T The Hill | Photo via Robert Freiberger/Flickr (CC BY 2.0)