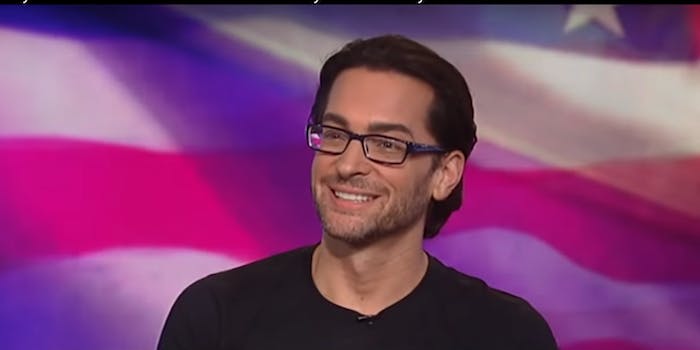 Conservative personalities rallied behind the activist.

The founder of the #WalkAway movement, Brandon Straka, received a 30-day ban from Facebook on Wednesday after posting a link to his recent interview at right-wing outlet InfoWars.

Straka announced news of his banning on Twitter, posting screenshots as proof of his temporary suspension and the notification on the offending post.

FACEBOOK JUST BANNED ME AS I AM PLANNING THE #WalkAway March on Washington!!! I have been banned from posting leading up to the March. This is devastated for our ability to reach people!!! I was banned for mentioning my interview with Alex Jones. Can anybody help??? pic.twitter.com/DDozepNaAI

Straka said the suspension comes ahead of his planned march on Washington, D.C. and cuts him off from over 180,000 members of his #WalkAway campaign (the #WalkAway Facebook group has just over 76,000 likes).

“I’m devastated right now. WalkAway Campaign is a grassroots movement. We don’t have corporate sponsors. We don’t have backers. We are raising the money and the awareness for our event ourselves. We use GoFundMe to raise money. And today Facebook took away my ability to communicate with the 180,000 members of the campaign leading up to the March,” Straka told right-wing outlet the Gateway Pundit.

“This is going to smash my ability to provide information, answer questions, raise money, and rally with my people,” he continued.

By Wednesday afternoon, Straka appeared to be posting in the #WalkAway Facebook group from an alias account.

The New York resident launched the #WalkAway movement back in July with a YouTube video in which he explained how he had grown disillusioned by liberalism and the Democratic Party. Arguing that Democrats merely used people of color and LGBTQ people for votes but did little to advance minorities’ agenda, Straka called on others who felt the same to #WalkAway from the party in protest.

At the time of his Facebook suspension, Straka was promoting his appearance on InfoWars, an outlet whose pages and content were removed in a permanent ban from Facebook in August.

Since his public break with the Democratic Party and ideological shift to the right, Straka has become somewhat of a celebrity among conservatives who were already convinced that social media companies actively censor conservative voices.

After news of his suspension on Wednesday, right-wing media personalities quickly rallied around Straka.

#WalkAway organizer banned by Facebook right before his march.

But there's no bias against conservatives. Honest!https://t.co/osw167Urjz

Facebook’s blanket ban on content associated with InfoWars and its founder Alex Jones in August coincided with similar actions on the same day by YouTube, iTunes, and Spotify. Twitter followed suit only last week after Jones turned up to the Senate hearing with Twitter and Facebook, at which the company’s CEO Jack Dorsey was questioned.

It appears that in accordance with the Facebook ban, posting a link to InfoWars.com alone results in a temporary suspension. Facebook did not immediately respond to the Daily Dot’s request for comment.