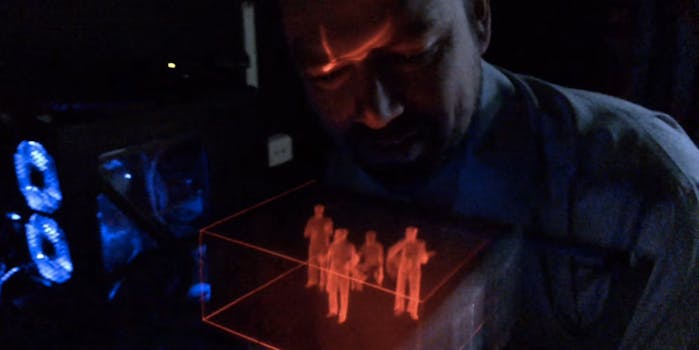 And it wants to turn them into an entirely new art form.

As soon as R2-D2 projected Princess Leia’s holographic message to Obi-Wan Kenobi, anyone watching Star Wars undoubtedly thought, “I want that.” Holographic technology has come a long way since it became a Hollywood fixture several decades ago. Now, one startup wants to give artists that Star Wars-style projection technology and see what they create.

Voxon, which showed off its VoxieBox technology at TechCrunch Disrupt this week, believes that holographic entertainment and communication are on the verge of becoming available to mainstream consumers.

The company’s founders created the technology in their basements and garages, and now they’re raising money on Indiegogo to host a series of art shows demonstrating their creation. After 30 years of development, they say, the technology is ready for engineers and artists to manipulate it and apply it to all manner of projects.

VoxieBox works by placing voxels—or volumetric representations of items—on a three-dimensional grid and creating light sculptures that can move around. Voxon’s founders say the technology is like Lego meets 3D-printed light. VoxieBox emits light at very high speeds, creating the illusion of a 3D object. The end result is an image that can be viewed from all angles, whether the viewer is moving around or standing still.

Voxon’s founders are now raising money to build a VoxieBox that can be shared among artists in New York City. The goal is to help artists and engineers develop interesting and unique ways of manipulating light and 3D images to create new forms of art.

Voxon isn’t the only company trying to make accessible holographic technology a reality. Earlier this year, a startup appropriately named Leia showed off a prototype device that fits in the palm of one’s hand and is operated from a two-inch-square mobile device. Leia founder David Fattal began testing the technology in 2012, and he described his ideas for multiview 3D displays in a paper published in the journal Nature.

The holographic technology that Voxon created will be on display as the company works with artists to host shows that demonstrate its many uses. The company is selling tickets to shows through its crowdfunding campaign.