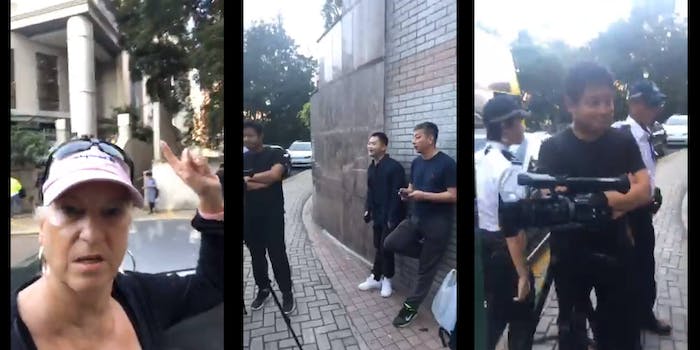 In a video, a woman confronts men from Beijing filming voters in Hong Kong as the latter delivered a strong, pro-democracy message following months of protest.

“In the 30 years I have been here I have never seen this before,” Richey says in English. “These guys are from Beijing.”

“All these people’s faces are being taken by these people from Beijing,” Richey warns in the video.

“They think they have the freedom to film. That’s because we’re in Hong Kong. If they were in Beijing, no way they’d have this freedom,” she says.

Throughout the exchange, Richey shouts warnings to voters across the street. When a young woman passing by says something about Richey being an American, she rattles off a retort in Chinese, then switches to English. “This is not right. Because AI, artificial intelligence is very strong, and so they’re filming all these people.”

Initially the police they asked to intervene failed to do so, Richey claims.

Finally, police do ask the men to leave.

At the conclusion of the video, Richey is somewhat satisfied with the outcome, but remains concerned.

“If those are just a couple of guys filming here, that probably means it’s going on all over Hong Kong,” she says.

Since being posted, the video has amassed more than 200,000 views and thousands of shares. One version has added Chinese and English subtitles. The video has since crossed from Facebook onto other platforms.

“Thank you so much! Fight for freedom stand with Hong Kong!” one woman on the original video. “Andrea Richey your video encouraged a lot of people and have the guts to stand up for they think is harmful to the public. You have set a really good example to Hong Kongers! You are so brave,” commented another.

Men from Beijing found filming voters at voting stations at the #HKDCElections1124https://t.co/A5NLpH7XDk

Andrea Richey said:
Men from Beijing found filming voters at voting stations.
Very shocked and disappointed today when I went to vote in Hong Kong and I found three guys filming me and all the voters going into the polling station.
⁦@lukedepulford⁩ https://t.co/VWjJD5idzy

Though stunned by the attention her video received, Richey was just glad to have been of service.

“For those of you that missed it, my FB Live little impromptu ‘voting in HK video’ has insanely now gone viral,” she wrote on Facebook. “The positive and supportive feedback was absolutely so amazing. Thank you to all the people in not only Hong Kong, but also from all over the world.”