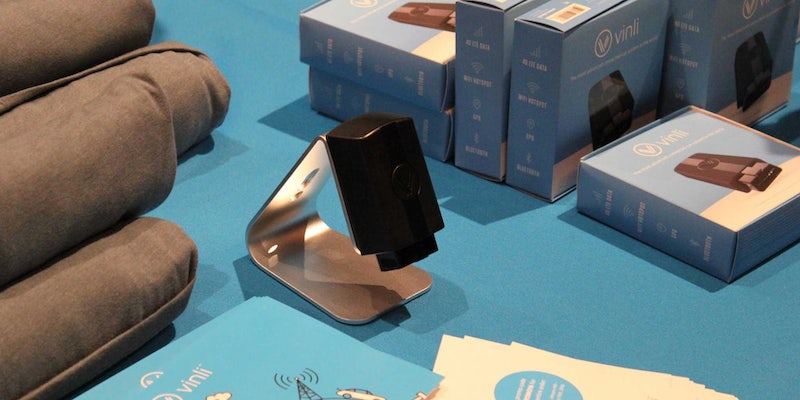 Vinli makes even your old, beat-up ride into a mobile hotspot

Thanks to the prevalence of smartphones, commutes have been made more tolerable and filled with streaming media. Getting the most out of all that incoming data requires a consistent network, and Vinli is aiming to give it to you by turning your car into Wi-Fi on wheels.

Despite its unassuming, blocky build, Vinli packs quite a bit of promise. The compact dongle plugs directly into a vehicle’s On-board diagnostics (OBD) port. As soon as it’s set up, it begins the transformation process to turn your standard grocery getter into a smart car. Nearly every gas-powered car models manufactured after 1996 and most hybrids are compatible with the device.

The first step of the automotive metamorphosis is to harness mobile networks to make the car a truly mobile hotspot. Vinli uses T-Mobile’s 4G LTE network to deliver in-car Wi-Fi to the user. Data is pay-as-you-go, purchased in 500MB, 1GB, or 3GB chunks.

A Vinli representative told the Daily Dot the data doesn’t expire, so you don’t have to worry about paying for unused data or having to start fresh every month. The company also offers an auto-renew feature that buys up more data when the pool drops below 50MB available.

For the time being, T-Mobile’s service plans like Music Freedom and Binge On don’t apply to Vinli—though a representative noted it may be a possibility in the future.

Of course, once you have a Wi-Fi network set up in your car, there’s the question as to what to do with it. That’s where Vinli’s app catalog comes in. The company is working on turning Vinli into a platform that developers can build unique apps for. That includes everything from entertainment to diagnostics.

So far, the lineup of apps available on Vinli is sparse, but there is a curious focus on the Internet of Things. A Vinli representative explained how the app integrates into the IoT concept to help other connected devices react to your needs.

For example, when you leave your house, a paired home security app can automatically hit the lock for you. Features like that don’t even require users to have their phone on them; because Vinli is basically like a compact computer that can jam into your car’s data port, it can send and receive data from the cloud on its own.

Vinli already works in tandem with SmartThings—the IoT-centric startup bought by Samsung—and Nest, among others.

If you’re interested in smartening up your car, know that it won’t come cheap. Vinli is priced at $199 on its own. Data starts at $5.99 for 500MB, and after two years of use, the Vinli Sync feature that sends data to the cloud costs $29.99 for the year.

That said, the company has made a case for just how invaluable it can be during its time at CES; its partnered with Uber to equip the rideshares with Wi-Fi hotspots for the course of the event. Who knew it was cars that would turn out to have the best Wi-Fi in town?