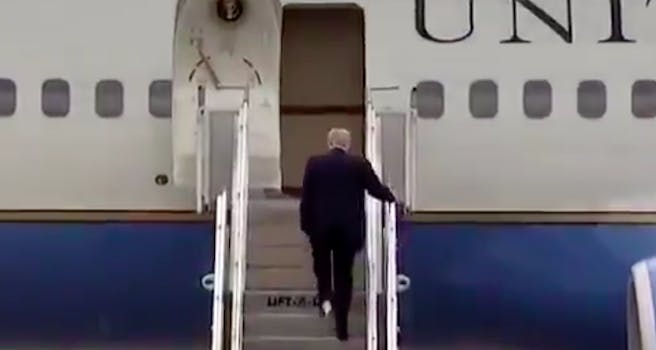 This video of Trump boarding Air Force One with TP on his shoe is, unfortunately, real

So gross, so dumb.

On Thursday, President Donald Trump boarded Air Force One to head to Rochester, Minn. for a campaign rally. But he had a very gross stowaway: a piece of toilet paper, or something similar,  stuck to his shoe.

We’ve all done it—left the bathroom with a paper passenger still clinging to our feet. But most of us have friends who will tell us so we don’t waltz back to the bar with it.

Trump has a full staff to cater to his needs, but still no one told him he had TP on his shoe as he boarded Air Force One. It’s a little different when you’re arguably the most famous person on the planet, your every move watched by the press and millions around the world.

There were some questions about the veracity of the video; in this age of fake news and deep fakes, it’s a worthwhile question. @MaltLiquorLogic shared the video on Twitter yesterday, but protected their tweets today, making any links to the video useless.

Then, late last night, Politico journalist Beatrice-Elizabeth Peterson confirmed that the video was, in fact, real.

“This video of President Trump with toilet paper on his shoe is 100% real. He was boarding Air Force One in Minneapolis earlier today,” she tweeted.

This video of President Trump with toilet paper on his shoe is 100% real. He was boarding Air Force One in Minneapolis earlier today. pic.twitter.com/wr0ZnXknCx

The video shows Trump walking all the way up the stairs into the aircraft, then turning around at the top to wave to the crowd. The offending paper gets dislodged on the landing at the top of the stairs, and a staff member eventually notices and removes it.

One has to wonder, how long had the paper been there? There is, presumably, a longer trip from a restroom, to a car, to the tarmac, almost to Air Force One, than from the graffiti-covered stall back to a barstool.

Trump is also a noted germaphobe, and hates to be embarrassed. With his bathroom-related humiliation on full display, someone on his staff is certain to face the brunt of his anger.

A set of stairs is gonna get fired tonight.

This is going to infuriate Trump.
He hates to be humiliated.

I thought this was hilarious until I realized that someone on his staff is going to be screamed at and verbally abused over this. Someone low level. Possibly demoted or fired.

Again, it’s happened to all of us, and it’s ultimately a stupid distraction. But really, in these truly horrifying times, maybe it was the stupid, totally on the nose distraction we needed.