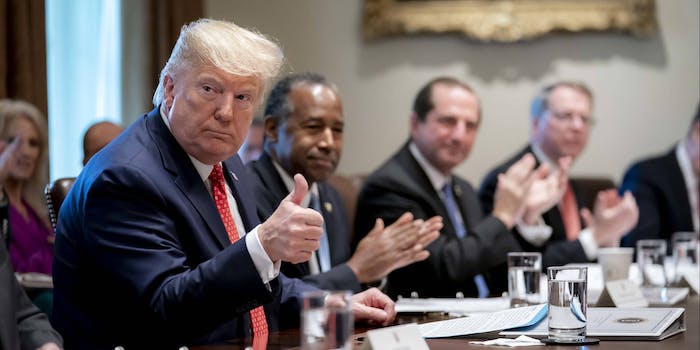 Trump says he wants to raise the vaping age to 21

The president made the remarks during a roundtable at the White House.

President Donald Trump on Friday said that his administration is aiming to raise the age to purchase vaping products to 21 during a roundtable with stakeholders in the debate, according to pool reports.

The president held a meeting on Friday—something he had hinted at on Twitter earlier this month—to discuss vaping. Trump, who appeared to back an expansive flavor ban several weeks ago, seems to have cooled on the idea.

However, on Friday he told anti-vaping advocates and vaping industry executives that “we are going to be doing” an age restriction on buying the products, saying that the age would be 21.

The FDA and the president do not have the authority to raise the smoking age, according to CNBC. However, there has been talk in Congress of passing a bill that would do so.

The president also noted several times during the meeting that banning it entirely could lead to vape flavors coming to the United States illegally.

“If you don’t give it to them, it is going to come here illegally,” Trump said, adding: “they could be selling something on a street corner that could be horrible. That’s the one problem I can’t seem to forget.”

In September, the Trump administration said they were working on a policy that would have banned the sale of all non-tobacco flavored vaping flavors. However, since then, the potential ban has become much less restrictive and may not ever happen.

The Washington Post reported earlier this week that Trump refused to sign a “decision memo” that would have banned most flavored e-cigarettes.