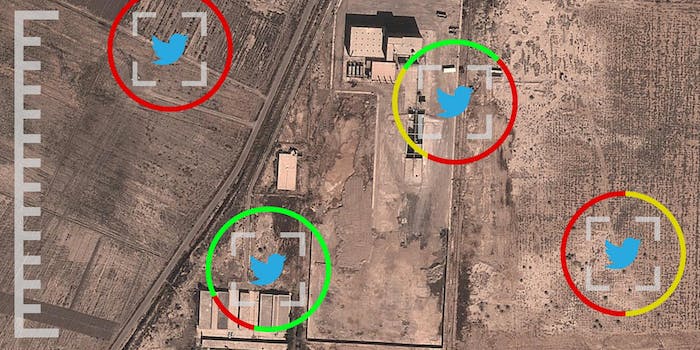 When jihadis post photos of mass killing on Instagram during the ongoing seige of Iraq, why doesn’t the social media network take down the gory pictures and ban the accounts that blatantly violate its rules? Because the American intelligence community doesn’t want them to.

U.S. intelligence agencies have asked social media companies to allow the propaganda photos and tweets from jihadis, Mashable reports, so that they could more easily monitor the militants bent on oversharing.

“U.S. intelligence prefers for these accounts to stay up, rather than come down,” an anonymous employee at a major social media company told Mashable.

Jihadi’s use of social media in Iraq is nothing new. Militants have used YouTube, Facebook, and Twitter as instruments of propaganda, organizing, strategizing, and fundraising since well before the beginning of the Syrian civil war.

The Islamic State (formerly known as ISIS or ISIL) are veterans of that civil war. They’ve been pushing the boundaries of social media for years—and, to no one’s surprise, American intelligence has been watching the entire time.

Last month, as violence began to consume Iraq, #Iraq trended on Twitter for over a week as ISIS militants tirelessly promoted their cause. Searching for news of the war on Twitter led readers to propaganda posters and promises of further conquest by jihadists’ biggest cheerleaders.

Of course, American social media companies likely couldn’t totally ban jihadists even if they wanted to: Dedicated users can easily get around bans on networks like Twitter or Instagram. And that’s good for planning U.S. military missions against the Islamic State/ISIS militants.

“There’s a lot of information that is being spread by ISIL accounts which could be used if the U.S. opts for drone attacks on Syria or Iraq,” intelligence expert Pieter Van Ostaeyen told Mashable. “They don’t seem to be afraid of anything being put out in the open. Or maybe they just don’t realize what they’re doing.”