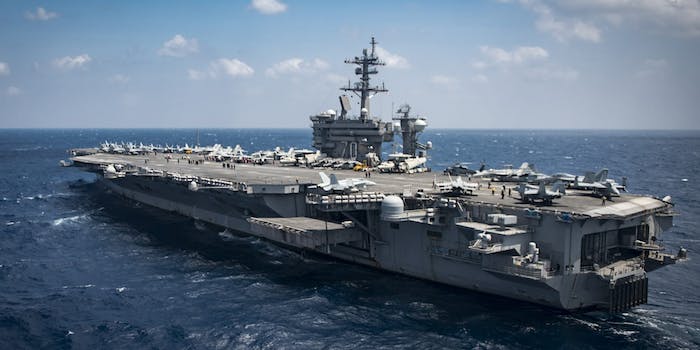 A United States Navy strike group is headed for the Korean peninsula as concern over North Korea’s ballistic missile testing program and capability continue to rise in the region.

U.S. government officials confirmed to Reuters that the USS Carl Vinson aircraft carrier and its support ships, previously harbored in Singapore, were en route to the Korean peninsula in a bid to pressure North Korean dictator Kim Jong Un to end his country’s weapons tests.

President Donald Trump met with Chinese President Xi Jinping this week to discuss how more could be done to curb North Korea’s nuclear program. Trump aides had discussed economic sanctions but Secretary of State Rex Tillerson has emphasized that a military resolution remains an “option” as far as the administration is concerned.

Meanwhile, North Korea has said it will increase its military defense as a response to Trump’s recent strike on Syria, which it criticized as “absolutely unpardonable.”

The state-managed Korean Central News Agency said the country was justified in seeking to bolster its military and nuclear strength in order to “cope with the U.S.’s evermore reckless moves for a war and defend ourselves with our own force.”

“Some forces are loud-mouthed that the recent U.S. military attack on Syria is an action of warning to us,” the statement continued. “But we are not frightened by it.”