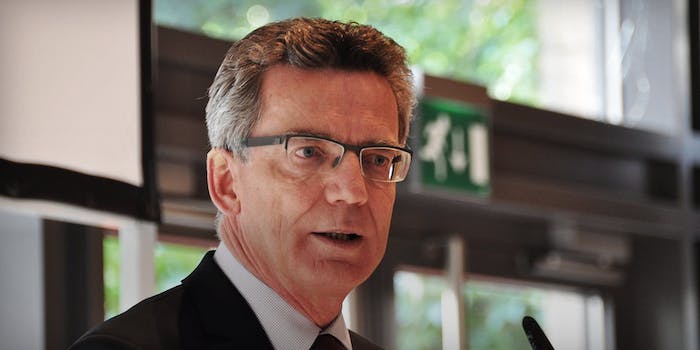 According to a major German newspaper, the U.S. government has increased its surveillance of top German officials.

According to a major German newspaper, the U.S. government has increased its surveillance of top German officials. This comes after President Obama ordered the National Security Agency to stop eavesdropping on Chancellor Angela Merkel.

According to Bild am Sonntag (BamS), there are currently 320 business and political leaders in the country being monitored by the U.S. agency. Among them is Interior Minister Thomas de Maiziere (pictured above), a cabinet member whose advice is said to be highly valued by Merkel.

“We have had the order not to miss out on any information now that we are no longer able to monitor the chancellor’s communication directly,” BamS quoted an NSA employee as saying.

“From the roof of the embassy, a special unit of the CIA and NSA can apparently monitor a large part of cellphone communication in the government quarter,” the paper said.

The report from BamS also hinted at more corporate espionage on the part of the NSA. U.S. National Security Council spokeswoman Caitlin Hayden, however, rejected the notion that Washington spies to give U.S. firms a competitive advantage.

According to BamS, the German company SAP was among the NSA’s targets. The firm is the world’s largest producer of business management software, and also a competitor to IBM and Oracle.

Last year, SAP enjoyed a rise in profits as many customers became wary of data security solutions its U.S. counterparts offered. The news followed reports that the NSA was meddling with encryption software designed by American companies.

When Merkel first learned that she was being closely monitored by her foreign allies in Washington, she called for breach of trust to be repaired. Obama’s concessions, such as halting the NSA’s surveillance of allied heads of state, have done little to repair the relationship between the two governments.

Berlin’s diplomats have made repeated trips to D.C. on fact-finding missions, but the investigations were reportedly stonewalled. Only a 1,000-page report has been declassified and turned over; it was heavily redacted and mostly procedural. Thus far, the Germans have been unimpressed with Washington’s attempts at transparency.

In June, the German people gathered to celebrate the 50th anniversary of President John F. Kennedy’s famed “I am a Berliner” Cold War–era speech. After his assassination, the plaza was renamed in his honor.

Today, officials in the capital talk of defending the nation against Americans by launching their own counterespionage program—an unprecedented shift in foreign relations, given that Germany has long considered the United States its friend and mentor.