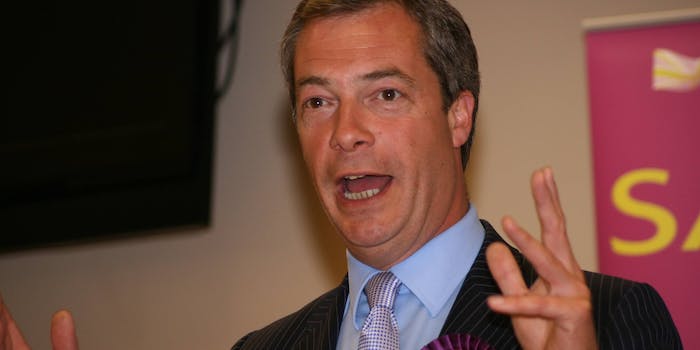 UKIP under fire for song with faux-Jamaican accent

When it comes to political ads, you can point to many terrible examples: A woman running for Congress declaring she is not a witch comes to mind, or a candidate for the U.S. House of Representatives shooting a copy of the Affordable Care Act to win votes. But in Britain, this kind of absurd politicking is far more rare—at least until the U.K. Independence Party (UKIP) came along.

Help get the UKIP Calypso by The Independents to Number 1 http://t.co/ChKeW2QKVs pic.twitter.com/KB8erhPnat

Riding in the polls as the third most popular party in the U.K., the UKIP recently got its first member of Parliament elected, has 24 members of the European Parliament, and has hundreds of local elected politicians. It also released its own calypso anthem on Monday, and it’s doing… surprisingly well (if you don’t count the accusations of racism).

Popular British DJ Mike Read, a 67-year-old white guy and confirmed supporter of UKIP, adopts a fake Jamaican accent for the tune and sings about anti-European foreign policy. After a flurry of accusations that the mock-Caribbean accent was racist, Read assured listeners to BBC Radio Berkshire on Monday that it was not meant to be insensitive to race.

“If anyone has taken it the wrong way, many apologies,” Read said. “But it was never meant to be remotely racist.” He added: “It’s an old-fashioned political satire … you can’t sing a calypso with a Surrey accent.”

At it’s high point on Monday, the single was in the Top 10 of the U.K. iTunes singles charts. At the time of publication, it had slipped slightly but was still in the Top 20, beating out others like Eminem.