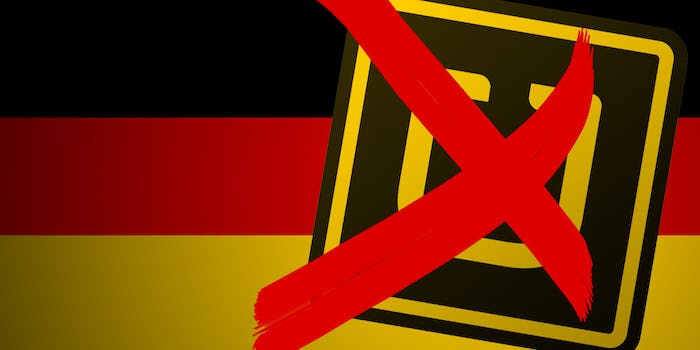 Of course, Uber plans to appeal.

A court ruling in Frankfurt has left the taxi-finding service Uber banned across Germany. Why? Because the drivers affiliated with the company do not have the necessary taxi permits to operate in the company. But in a statement, the company says it intends to disregard the ruling.

The court’s decision is the latest in an ongoing pushback against Uber by local and national governments around the world, and had already been banned in Berlin earlier in August.

The ruling was made at a preliminary injunction, meaning it’s not yet set in stone. But the penalties are severe if the company does disregard the decision, with the $17 billion startup liable for a $330,000 (250,000 EUR) fine for every infringing taxi journey—as well as the threat of jail time for the Uber’s directors, TechCrunch reports.

Uber offers a smartphone app that allows users to book an array of taxis and lift services. Its aggressive expansion tactics—as well as the questionable safety record of many Uber-affiliated drivers—has left some authorities suspicious of the company, and established taxi services have complained about the company’s relative lack of regulation.

According to Wired, under German law drivers without a taxi licence can charge no more than the price of fuel and operating costs for a journey, far less the lowest rates that Uber offers.

Prior to this ban Uber was active in Dusseldorf, Hamburg, Frankfurt, Berlin, and Munich, DW.de reports, in addition to other European countries. London has played host to bitter protests from taxi drivers earlier this year claiming unfair competition earlier this year, although the British authorities ultimately decided not to pursue a similar case to the ongoing one in Germany.

The company has confirmed to TechCrunch that they intend not only to appeal the Frankfurt court’s decision, but also to outright disregard it—saying in a statement, “Germany is one of the fastest growing markets for Uber in Europe. We will continue to operate in Germany and appeal the recent lawsuit filed by Taxi Deutschland in Frankfurt.”

“You cannot put the brakes on progress,” it adds. “Uber will continue its operations and will offer Uberpop ridesharing services via its app throughout Germany.” An Uber spokesperson also confirmed to the BBC that it will not suspend its operations, and views the ban as “unenforcable.”

Uber’s business practices have also come under increased scrutiny in recent weeks, with the leak of documents allegedly revealing the extent to which the company is going to in order to undermine its competitors. Uber has also recently made the high-profile hire of David Plouffe—a former top Obama campaign manager—as senior vice president in charge of policy and strategy, in an attempt to “help cities and citizens understand the Uber mission.”