Twitter has a growth problem, one that it just can’t seem to escape. Try as it might, new people who join the service just don’t know how or why they should use it. So to bolster the user base, Twitter is planning to roll out some changes that might fundamentally shift the way people use it.

During Twitter’s analyst day on Wednesday, CEO Dick Costolo said that 500 million people visit Twitter each month without logging in, and about 125 million people visit the homepage each month and don’t sign up. To turn those casual visitors into users of the product, the company highlighted some new features on Wednesday, including “Instant Timeline,” and “While you were away.” The company also mentioned something everyone should be excited about: significant improvements in the direct messaging function.

Now, when people sign up for Twitter, they’ll be prompted to select certain interests and Twitter will create a timeline for them without requiring them to manually choose who to follow. Twitter wants to give people an idea of what they can expect to see on the platform—of course by providing an Instant Timeline, it means the network is essentially telling people how to use it rather than let them discover Twitter on their own.

As much as Twitter wants to be the place for real-time news and information, it’s also a barometer of trends, memes, and Internet outrage. While some people use the service almost exclusively for news and events (hello, fellow journalists!), others use it as a way to connect with friends and fandoms. Chances are, new users wouldn’t see #AlexFromTarget in their Instant Timelines. Though Twitter does also offer the option to find people you may know from contacts like Gmail, so finding and following friends is relatively simple.

But by teeing up ready-made lists of tweets, Twitter is boxing people into the company’s vision of the platform, rather than letting it grow and mature organically. Savvy users might ignore Twitter’s suggestions entirely, but it could teach the uninitiated a way to use Twitter they might not have thought of for themselves. The “messiness” of Twitter is part of what makes the network what it is, it’s something that’s been celebrated, and these efforts completely divert from that.

The “While you were away” feature the company is currently testing on its mobile app also throws a wrench in the real-time feed people have grown accustomed to. When Twitter rolled out suggested follows and tweets earlier this year, the response was less than enthusiastic. People are not happy with Twitter mucking around with their timelines by arbitrarily throwing in tweets from brands and accounts they don’t follow, and now it’s going to rely even further on algorithms. 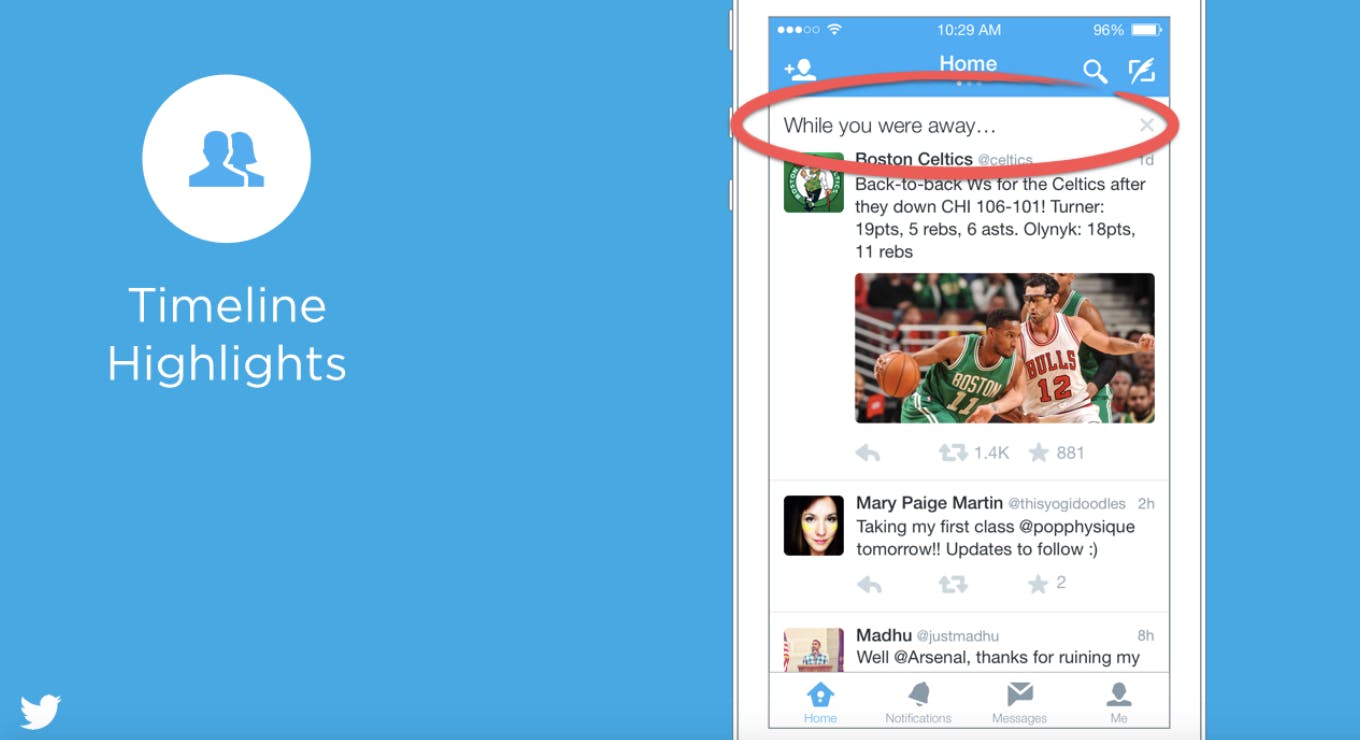 When you log in to Twitter, soon you’ll see tweets appear at the top of the timeline with timestamps that aren’t immediate—the idea is that these might be posts, videos or photos you missed but would likely want to engage with. In doing so, the Twitter timeline is slowly becoming more like Facebook, something Twitter’s power users have long been wary of.

Any change a social network makes is generally met with contempt from its users, and Twitter should expect nothing less. But the changes are necessary to appeal to a larger audience that has yet to understand why they should use the service. The company needs to make the onboarding process easier and nudge casual users into tweeting more.

Twitter has hinted at such changes for months, and as pressure mounts to turn logged-out users into active tweeters, people should expect to see a greater emphasis in simplifying the platform in the future. As long as the real-time feed isn’t turned into algorithmically discovered posts and photos, the majority of Twitter’s users should be happy with the growing userbase adding more voices and perspectives to the mix.

Image by jeffreyw/Flickr (CC BY 2.0) | Remix by Jason Reed