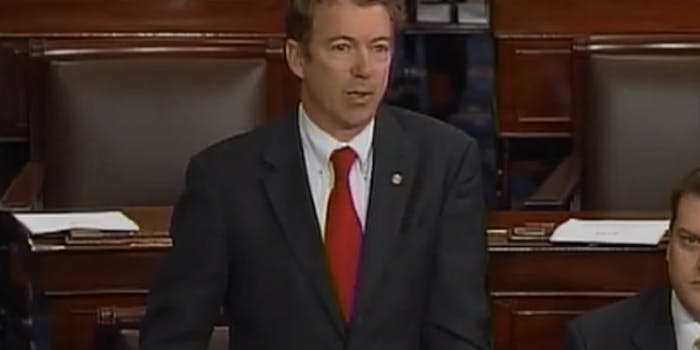 The Republican senator from Kentucky was active on social media throughout his 13-hour filibuster.

Early Thursday morning, Kentucky Sen. Rand Paul ended his rare talking filibuster as he blocked a vote on President Barack Obama’s pick for CIA Director, John Brennan. The Republican Senator has taken a firm stance against the Obama administration’s use of unmanned drones and worries that at some point it could be used against an American citizen on American soil.

“I rise today to begin to filibuster John Brennan’s nomination for the CIA,” Paul said Wednesday morning. “I will speak until I can no longer speak. I will speak as long as it takes.”

While Paul set out on his historic filibuster, his office took to social media for what might be the first ever “tweetibuster.” Paul and his supporters were active on Twitter, Facebook, and YouTube during the day Wednesday and well into the night. Paul’s official YouTube channel was posting each hour of the filibuster and the videos appeared to be going viral late Wednesday night with the view counter stuck at 301, a common sign of a rapid increase in viewers.

Paul kicked off his filibuster on Twitter shortly before 12 noon Eastern. By the end of his nearly 13-hour filibuster, his office had sent more than 50 tweets and two dozen Facebook posts.

“No President has the right to say that he is the judge, jury, and executioner,” Paul posted on Facebook. Like many other posts throughout the day, it received thousands of likes, shares, and comments.

Within hours, #Filibuster, #StandWithRand and #Filiblizzard (a nod to the winter storm brewing above Washington on Wednesday) had all taken off on Twitter and were trending for much of the day. According to Topsy.com, #StandWithRand was tweeted more than 70,000 times on Wednesday night. 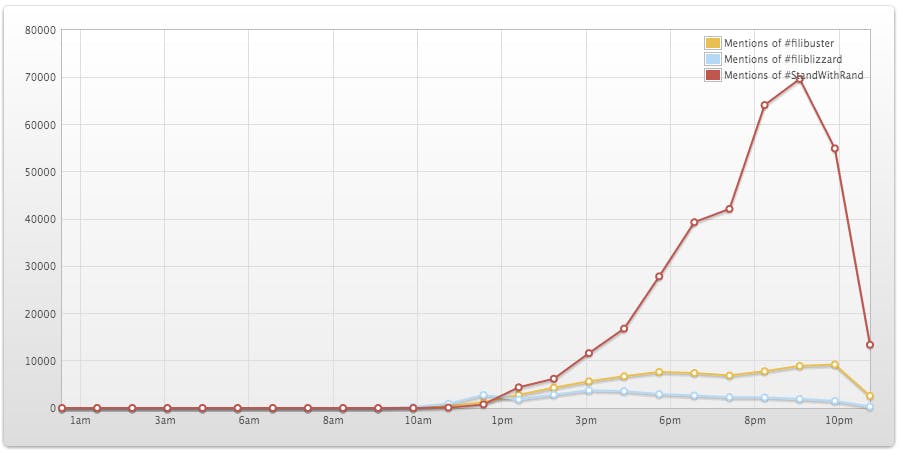 There were an endless number of tweets about the event and many were supportive of the senator’s actions. “If the POTUS is allowed to legally kill American citizens in the U.S. without trial, the country is dead. It is that simple,” wrote @RockPrincess818.

Paul was able to take a break without ending his talking filibuster, by allowing fellow senators to take the floor and ask questions – or say whatever they want. Since electronics are not allowed on the Senate floor, Texas Sen. Ted Cruz printed off tweets of support and read them aloud inside the chamber.

Cruz also jokingly noted how impressed he was with Paul’s social media skills. “I will commend the senator from Kentucky for being so flexible that he was able to tweet while standing on the floor of the Senate,” he said.

The last time a Senator took to the floor with a talking filibuster was in 2010, when Vermont’s Bernie Sanders spoke against a tax bill for more than eight hours. The longest was Sen. Strom Thurmond, who talked for 24 hours and 18 minutes against the Civil Rights Act of 1957.
Early Thursday morning, Paul’s filibuster fell short of breaking Thurmond’s record, when it ended at 12:38am, almost 13 hours after it began. On Twitter, Paul wrapped up his “tweetibuster” by thanking the various senators who stood by him. His final tweet came just after 1am, and even at that early hour, it was retweeted more than a thousand times.

“Thank you to my colleagues in the House & Senate, and to all the Americans who stood w/ me tonight in support of preserving civil liberties,” he wrote.