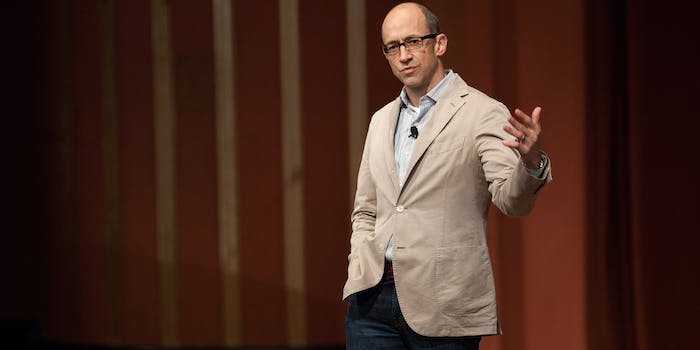 There's more than one way to run into a tweet.

Twitter intends to make itself warmer, fuzzier, and all around more inviting to users who don’t live and breathe the realtime social network. During its Q3 earnings call today, Twitter CEO Dick Costolo outlined the company’s plans for growth: “[It’s] a much more aspirational strategy… that can allow the company to go after an audience much larger than a logged-in user base.”

Twitter’s revenue this quarter was $361 million, roughly in line with analyst estimates. Twitter grew from 271 million monthly active users (MAUs) to 284 million in the current quarter—not quite enough growth to wow investors.

On the call, Costolo likened Twitter’s audience to a series of concentric circles, from the hyper-engaged daily users—”the fuel that powers the entire system”—to a broader audience that might run into an embedded tweet on another platform. Those platforms will play nicer with Twitter following the launch of Fabric, a new set of tools for third party developers introduced at the company’s Flight conference last week.

Twitter saw a gain of 3.3 million new users from the company’s “direct actions” like discovery notifications, while 9.8 million new users came from the network’s organic growth, for a total of 13 million net new users this quarter. Naturally, Costolo and co. shifted the focus from that traditional metric of growth to how Twitter might reach and monetize folks who might never plan to sign up for a Twitter account at all.

Costolo notes that of course Twitter still aggressively pursues new users, making mention of its successfully simplified desktop signup process, which it plans to extend to mobile. Recognizing that Twitter’s self-obsessed culture can be intimidating to new users, the company plans to lower barriers to entry that keep people for signing up or engaging with the platform.

Twitter’s logged-out userbase remains two to three times the amount of logged-in users. Much of the time those logged-out users arrive via search engines and land on a profile page or a tweet’s details page. Given that, Twitter plans to optimize those pages to both add value for those not as familiar with Twitter, while also coming up with ways for its ad products to reach those users. When asked about its plans to make money from Vine, its video platform, Costolo was evasive, suggesting that Twitter’s “near term and immediate term focus in Vine” is to “build beautiful content creation tools.”

Perhaps the most noteworthy reveal from the call, though, is that ads are finally making their way to Tweetdeck. We couldn’t expect them to leave it alone forever.