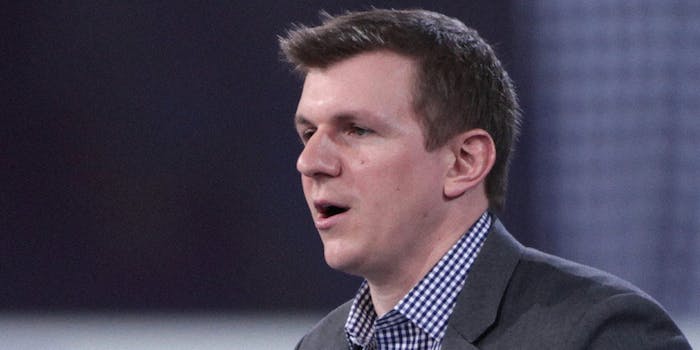 The controversial media outlet broadcast a hidden camera sting on a Twitter engineer.

Social media giant Twitter criticized conservative media outlet Project Veritas in a public statement on Wednesday for its “deceptive” and “selectively edited” new report, in which a senior Twitter engineer appears to share negative personal opinions about President Donald Trump and discuss the potential for sharing his private messages or usage data with authorities.

The video is the latest in a new series of provocative undercover stunts by the team at Project Veritas, a nonprofit led by Trump agent James O’Keefe, and it focuses on a Twitter senior network security engineer named Clay Haynes.

In several brief, subtitled clips, Haynes appears to be out for drinks with a female member of the Project Veritas investigative team, who is recording him via hidden camera. He trustingly answers her questions about his job and discusses Trump. The context of the meeting is not made clear.

“We’re more than happy to help the Department of Justice in their little investigation,” Haynes can be heard saying in response to a question about what Twitter is doing to stop Trump’s tweets. “Giving them every single tweet that he’s posted, even the ones he’s deleted, any direct messages, any mentions…”

Again, in a second meeting with Haynes, in which O’Keefe himself turns up under disguise, the engineer repeats that the company can hand over personal data and information to authorities. This time, however, after O’Keefe playfully suggests the engineer peer into Donald Trump Jr.’s direct messages, Haynes tells him that this kind of thing would only be done as part of a “subpoena process.”

Does @Twitter have a subpoena to hand over all of @realDonaldTrump and @DonaldJTrumpJr's DMs to @TheJusticeDept? #TwitterGate #AmericanPravda pic.twitter.com/cBJRg7H0Ur

Trump Jr.’s DMs have already been in the news, when it was revealed he communicated with Wikileaks during the campaign.

Unsurprisingly, when the video went live, it cascaded through the conservative media sphere, where it was featured on Breitbart News and was an immediate hit on conspiracy peddling right-wing websites like InfoWars—which sensationally claimed that Twitter was whimsically “ready to give up Trump’s private DM’s to the DOJ.”

Haynes soon took to Twitter to reflect gloomily on what he could see was about to unfold, but in doing so provoked more than 400 replies, primarily from trolling right-wing or apparently pro-Trump accounts.

Well. This is no fun.

They are publicly owned. Sadly, the majority-owner is Saudi pedophile, Prince Alwaleed, who was also the single biggest @HillaryClinton financial backer. #Twitter #ProjectVeritas

His employer, on the other hand, was quick to distance itself from him before addressing how the company handles users’ data in a statement released just hours after the video

“The individual depicted in this video was speaking in a personal capacity and does not represent or speak for Twitter,” a company spokesperson told the International Business Times.

“Twitter only responds to valid legal requests and does not share any user information with law enforcement without such a request… Twitter is committed to enforcing our rules without bias and empowering every voice on our platform, in accordance with the Twitter Rules.”

This should come as no real surprise. The social media platform makes it quite clear, in privacy policies and terms of service, how it holds and stores the information that its users choose to share—including direct messages. This is far from a revelation.

In one part of its statement, Twitter hits at Project Veritas and its methods, saying, “we deplore the deceptive and underhanded tactics by which this footage was obtained and selectively edited to fit a pre-determined narrative.”

These are familiar “tactics” for which Project Veritas has gained national notoriety. The organization, which received $20,000 in donations from Trump’s charitable foundation in 2015, has targeted various mainstream and left-leaning media outlets that have fallen within the president’s crosshairs.

O’Keefe’s team first went after CNN in June and the New York Times in October. But it was the Washington Post in November where the organization was truly embarrassed, having their undercover employee exposed as she pretended to be a sexual assault victim in order to bait the Post’s reporters.

Much like every O’Keefe exclusive, this one too falls flat, landing nothing more than an applause from its own approving choir of supporters.