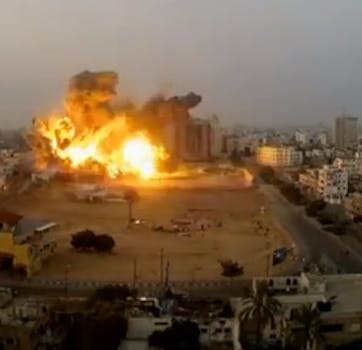 Much has been made of the tweets between Hamas and Israel as the current Gaza conflict plays out, but is Twitter breaking the law by giving Hamas a platform?

That’s what Christians United for Israel believes. The pro-Israel group, which claims to have more than a million members, is petitioning for Twitter to ban Hamas from its community.

Since 1997, the U.S. State Department has classed Gaza ruling body Hamas as a terrorist organization. Christians United for Israel argued that it is illegal under Section 2339A of the U.S. Criminal Code for an American company to provide material support, such as “communications equipment” to such groups.

The petition reads as follows:

It is not quite clear, however, if Twitter is violating federal law in this instance.

“This is a difficult and modern question and gets to the heart of interpreting what ‘material support’ means under the statute in a modern media environment,”  Roy S. Gutterman, director of the Tully Center for Free Speech and associate professor at S. I. Newhouse School of Public Communications at Syracuse University, told the Daily Dot.

“In 2010, the Supreme Court issued a ruling in a similar case called Holder v. Humanitarian Law Project, which found that the federal law did not violate the First Amendment rights of terrorist groups.

“The question is whether Twitter, in providing a forum for speech, even speech by terrorist groups, would run afoul of the law. I think in some ways, this is an open question. It remains untested whether Twitter should be construed the same way as an entity providing telecommunications equipment or tangible property to support a terrorist group. But the Supreme Court also noted that if a terrorist group had a so-called humanitarian or non-terrorist wing that did ‘independent advocacy’ unrelated to violence, it might be protected speech.”

Other groups which the State Department classes as terrorist organizations are active on Twitter, including al-Qaeda.

Georgetown Law professor David Cole suggested that many other companies could be deemed as providing “material support” to terrorists through cell phones, email, gas, or public broadcasting, given the vague, overarching wording of the law.

The difference here would seem that Christians United for Israel (which, it is fair to say, is an invested party in the matter) is concerned about Hamas getting its message and viewpoint across to a wide audience through Twitter.

“You may use the Services only if you can form a binding contract with Twitter and are not a person barred from receiving services under the laws of the United States or other applicable jurisdiction. You may use the Services only in compliance with these Terms and all applicable local, state, national, and international laws, rules and regulations.”

The only ways Twitter could be sure if someone is not allowed to receive services from U.S. companies would be to thoroughly investigate each account, since you don’t need to provide identification when you sign up, or to receive notice from authorities.

Regardless of the legalities here, it seems the @AlqassamBrigade account, which is run by Hamas’ military wing, may be violating Twitter’s rule about direct violent threats with tweets such as this:

That said, Gutterman suggested Twitter could argue that “it is simply providing a forum for political speech” and “under Section 230 of the Communications Decency Act, Twitter would most likely avoid any criminal or civil liability.”

If Twitter truly is a publishing platform, then Hamas’s tweets could be compared to a letter to the editor that a newspaper chose to run.

“In an analogous, ‘old media’ situation, could a representative of a terrorist organization write a letter to the editor of an American newspaper?” Gutterman questioned. “Would that paper then be considered to be providing material support? Probably not.”