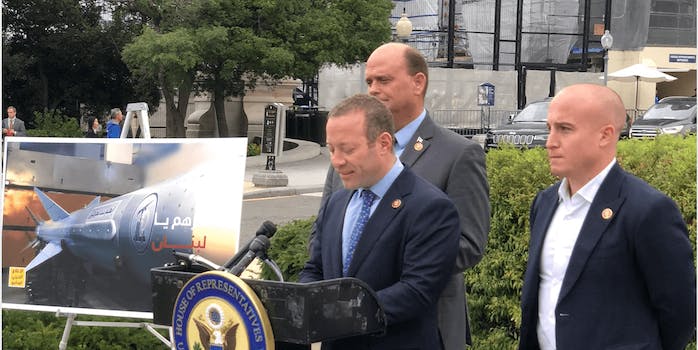 A trio of congressmen called on Twitter to pull accounts associated with terrorist organizations from their platform during a press conference on Tuesday morning in Washington, D.C.

Gottheimer told reporters, “while some social media companies are making headway, others are doubling-down on a more hands-off approach. Today, as a group, we are sounding the alarm on Twitter actively allowing Hezbollah and Hamas—two jihadist terrorist organizations determined to kill Americans and our allies—we’re calling on them to take down the hundreds of thousands of followers that are online right now following Hezbollah and Hamas and encouraging the spread of terror.”

The congressmen sent a letter to Twitter on Sept. 17, drawing attention to the accounts and asking Twitter to pull them.

In response, Carlos Monje Jr., Twitter’s Director of Public Policy & Philanthropy wrote: “Twitter’s purpose is to serve the public conversation. We strive to create a place where people from around the world can come together to participate in an open and free exchange of ideas.”

Monje added later, “there is no place on Twitter for terrorist organizations, violent extremist groups, or individuals who affiliate with and promote their illicit activities.”

In a reply, the lawmakers wrote “we were surprised to learn that Twitter’s process for determining terrorist organizations differs from that of the United States. They noted that a 1996 law prohibits Americans from knowingly providing assistance or support to groups that have been labeled “foreign terrorist organizations” by the State Department. On Monday, Gottheimer called the language in the letter “a blatant affront to U.S. law.”

During Wednesday’s press conference the congressmen stood beside a photo of a missile that they said was posted by an account associated with Hezbollah.

On Wednesday, Gottheimer said: “We demand that by no later than November 1, Twitter comply and follow U.S. law, immediately change their policies and cut off all handles affiliated with Hamas, Hezbollah, and all terrorist organizations.”

He added that “Twitter as a U.S. based company is acting as a terrorist sympathizer.”

At the microphone, Rose told reporters, “these social media groups—Twitter especially, have a responsibility to each and every one of us to help keep America safe. But right now what they are doing, is they are choosing profits over patriotism, profits over national security.”

Throughout the press conference, the lawmakers frequently highlighted that they also approached Facebook and Google with the same request and those tech companies, unlike Twitter, agreed to police the content.

Reed told reporters, “Twitter got back to us and had the audacity to declare that Hezbollah and Hamas have a right to their platform because somehow there’s ‘good people’ in Hamas and Hezbollah that should have the right to express their message of hate and violence around the world. That is wrong.”

9.24.2019 Twitter Response to Gottheimer by The Daily Dot on Scribd

Gottheimer told reporters, “it’s one of the most unbelievable letters you’ll see. I can’t believe they published this. That they sent this letter to us. But in the meantime, we’re going to hold them accountable.”

When asked how they first became aware of this issue, Rep. Gottheimer told the Daily Dot, “several groups brought to our attention a few months ago that there was content online, continued content online, on several of these platforms promoting terror or terror propaganda from organizations that were designated as foreign terrorist organizations.”

When asked what advocacy groups approached them, Gottheimer said, “this came actually at us from three different groups and one of my constituents brought it to my attention.”

Twitter has long had a problem with violent and hateful individuals and organizations on its platform—the company famously paused their verification process after they were called out for verifying the white supremacist responsible for the “Unite the Right” rally.

However, the company has also found themselves in a tough spot. Whenever they pull accounts related to hateful groups, they’re simultaneously accused of censorship.