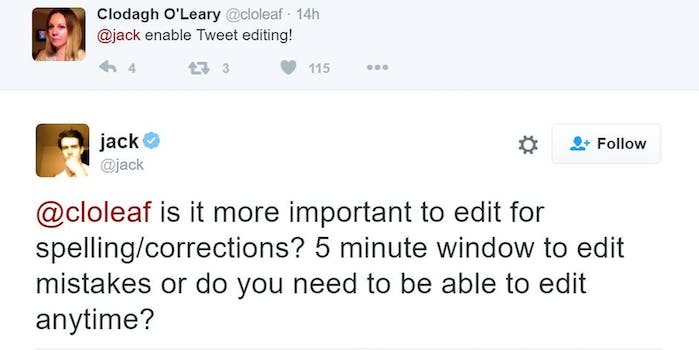 The end of delete, re-tweet.

Twitter CEO Jack Dorsey believes “a form of edit is def needed” for his platform.

Dorsey asked users yesterday what they want to see the site improve or create in 2017. Editing tweets was, unsurprisingly, a popular choice.

not sure why you're quoting this tweet but yes, a form of edit is def needed. But for everyone, not just those w badges

The CEO already seems on board, but he has some questions about how to implement the feature. He gave responders two options: the ability to quickly edit mistakes over a limited time after posting, or the ability to edit any tweet, any time.

The recommendation to edit posts is certainly not original. In fact, last year Kim Kardashian West voiced her opinion on the matter.

Other social media sites likes Facebook have had an ability to edit posts for years, but Twitter’s history with the feature has been a bit more complicated, with arguments for and against waging endlessly.

The site’s most controversial rule is its 140-character limit. Twitter relieved some pressure caused by the restriction earlier this year when it stopped counting photos. It seems Twitter now wants tweeting to be as stress-free as possible.

Other features requested by users for next year include better tools for handling abuse and creating topic channels.