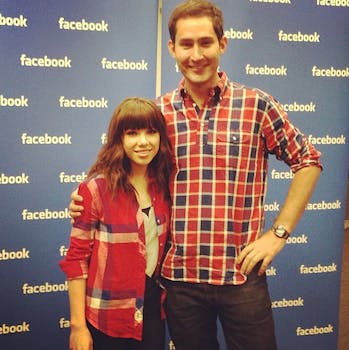 The New York Times reports that although Instagram cofounder Kevin Systrom swore his service did not receive another offer besides Facebook's, there was a verbal deal in place with Twitter.

As The New York Times reported, despite Instagram cofounder Kevin Systrom’s sworn testimony that his photo-sharing service did not receive any offers before selling it to Facebook, there was a verbal deal in place with Twitter.

The value of the deal was $525 million in cash and Twitter stock, according to the report—a bit less than Facebook’s blockbuster billion-dollar offer in April. (Due to the dipping of Facebook’s stock, that figure dropped to around $740 million at the time the deal closed in September).

If Instagram did receive an offer from Twitter, Systrom’s August statement to the California Department of Corporations may carry perjury or fraud risks. Three weeks before the Facebook deal was announced, Systrom reportedly told Twitter that Instagram would remain a public company, and Twitter apparently did not have the chance to make a counteroffer.

If Twitter did not have that opportunity, Instagram’s investors could have lost out on making more money off the company’s sale (Twitter cofounder Jack Dorsey was an early Instagram investor). Legal ramifications may hinge on whether Twitter made a “formal offer.” At the California Corporations Department hearing, Systrom said, “We never received any formal offers or term sheets.”