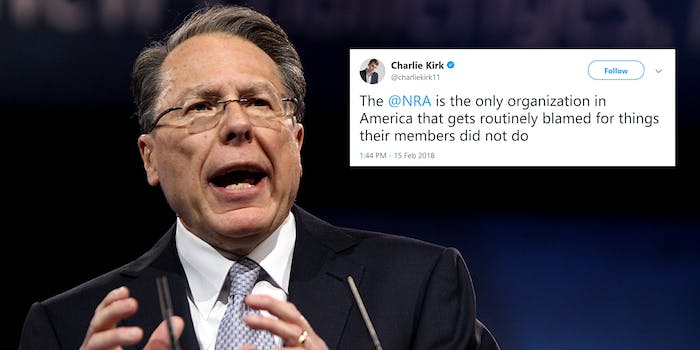 Imagine being this profoundly wrong.

There is perhaps nothing worse online than Twitter in the wake of a mass shooting, a time when millions of people turn constitutional scholars and gun safety experts.

And while people can mostly be forgiven for blurting out bad thoughts—on a network that practically induces them— while feeling raw after a tragedy, some takes are just plain wrong.

Like this one, from the founder of conservative college organization Turning Points USA, Charlie Kirk.

Kirk is partially right. The NRA receives an overwhelming amount of scorn when mass shootings happen, and a number of high-profile shooters do not have any direct ties to the organization. But the organization pushes to keep gun laws lax, which in turn gives killers easier access to these weapons.

The case could be settled there, but, more importantly, conservatives like Kirk are amazingly swift to blame organizations, religions, and nations that have nothing to do with actions taken by people not affiliated with them.

Take for instance, Islamaphobia in the wake of 9/11.

Members of the Islamic faith would like to have a word. https://t.co/j0kMDZEJnC

Or Black Lives Matter activists being blamed for violence against law enforcement officers.

Even extremely recent examples prove this to be false.

Just FYI, Charlie, the Trump administration is attempting to bar ALL travelers from entire countries whose citizens have never engaged in anti-US plotting. https://t.co/YPLLQwSQYQ

Planned Parenthood. La Raza. CAIR. I could go on…. https://t.co/yHcyX6iG7l