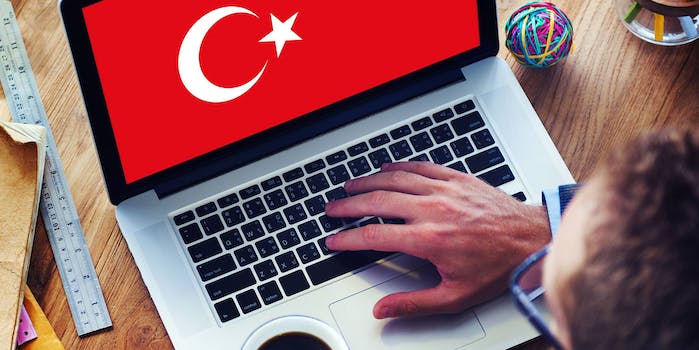 In an email to all service providers in Turkey, the government’s internet authority requested the blocking of the Tor anonymity network, along with ten of the most popular virtual private network (VPN) services in the country: Express VPN, Hotspot Shield, IPVanish, Private Internet Access, Psiphon, TunnelBear, VPN Master, VyprVPN, ZenMate, and Zero VPN.

According Füsun Sarp Nebil, founder of Turk-Internet.com, the request aims to prevent circumvention of government-imposed censorship via VPN services. Turkey frequently resorts to the nationwide “throttling” of social media services—limiting internet traffic to these websites which slows down their page loading time to such an amount that it effectively makes them unusable.

After today's #Taksim terror attack, this is how #Turkey denied citizens of the right to seek information#KeepItOn pic.twitter.com/Bzp5Qpnnw4

According to censorship monitoring group, @TurkeyBlocks, access to Twitter, Facebook, and YouTube were blocked by bandwidth throttling on Friday 1:20 PM local time. An hour later, instant messaging services WhatsApp, Skype, and Telegram joined the list of blocked services nationwide. While the Turkish government had blocked social media many times before, the throttling of instant message services is unprecedented on this scale.

Regarding the slowing down of internet traffic, Turkey’s Prime Minister, Binali Yıldırım, has said “These kinds of measures may be taken from time to time for security reasons. These are temporary measures and when the danger is alleviated, everything returns to normal.”

The security reasons that PM Yıldırım refers to are the popular protests against the arrest of 12 members of the parliament from the opposition Peoples’ Democratic Party, known by its Turkish acronym, HDP. The party’s co-chairs Selahattin Demirtaş and Figen Yüksekdağ are among those arrested on “terrorism” charges as part of the investigations linking the pro-Kurdish party to the armed group PKK, which the party strongly rejects.

Our Co-chairs #Yüksekdağ and #Demirtaş have been arrested.They could take us hostage, but they cannot make us surrender. #FreeHDPnow

Turkey’s wide definition of “terrorism” has put journalists and peace activists behind bars, but the recent arrests follow a row of concerning developments in Turkey, particularly under a declared state of emergency after the July 15 coup attempt. More than 100,000 public servants were dismissed since July and some 37,000 people were arrested for alleged links to the Gülen Movement. (The government blames the movement for the coup attempt) More than 170 media outlets are shut down and, according to independent media platform P24, the number of incarcerated journalists reached 142, making Turkey the leading jailer of journalists in the world.

These developments rang the alarm bells in the European Union and the United States. EU Foreign Affairs representative Frederica Mogherini took Twitter to express her concerns.

White House spokesman Josh Earnest said the U.S. is “deeply disturbed” by the detention of opposition. Tom Malinowski, the Assistant Secretary for Democracy, Human Rights, and Labor, also took to Twitter to urge Turkey’s government to lift the internet block.

However, this is not the first time that Turkey is blocking the internet to prevent protests, as the Daily Dot previously reported. Last week, the Turkish government shut down all mobile and landline internet access in the Southeast of the country to prevent protests against the removal of elected co-mayors in Diyarbakır, the largest city in the majority Kurdish region.

Back in September, the government again cut the internet access of 12 million people after removing 28 town mayors from the same Kurdish opposition party. In addition to the throttling of social media during times of crisis, regional shutdowns are getting more frequent as the Turkish government increases military operations in neighboring Syria and Iraq.

These measures are taken primarily to prevent news gathering and to limit calls for protest. During the recent arrests made at the police raid to HDP’s headquarters, journalists were not allowed near the building and the riot police reportedly employed jammers to block cell phones. Police jammers are being used to prevent news gathering during Turkish protests since at least since 2011.

The scale of the internet shutdown and social media throttling caused the press serious difficulties as they attempted to reach local sources and report the protests against the government’s crackdown on opposition.

And just to make it all more difficult to report, government cuts internet in SE #Turkey, blocks #WhatsApp and #Twitter, so this is with VPN

The Internet block in Turkey continues today too. We are having difficulties reaching our local sources as they have no or slow Internet.

Serious internet access issues in Turkey today, even with VPN.

However, the news of the government order to block VPN services and Tor caused the most concern, since these are the main circumvention tools under Turkey’s censorship regime. Internet activists quickly drew comparisons between China, known for its notorious Great Firewall, which started blocking VPN services back in 2012 by deep packet inspection (DPI) technology.

This is it guys, Turkey goes full China! Government ordered ISPs to block many VPN services and @torproject https://t.co/QuQLtttlPk [TR]

The Daily Dot recently revealed that all Turkish ISPs have been obliged to install DPI tools in their infrastructure since 2014, and previously documented its use for censorship purposes.

In the face of the new level of internet censorship in Turkey, internet activists, rights organizations, and VPN companies are taking a stand. Open-sourced censorship circumvention tool Lantern provided the Turkish version of their Android app, similar to the one used in China. Popular VPN services reacted to the nationwide blocks, such as TunnelBear, announcing free unlimited data to its users from Turkey, as they’ve done in the past.

To our friends in #Turkey, you now have unlimited data to stay connected with #TunnelBear, the Internet is better when it’s open

VPN services listed in the Turkish government’s order are still being reportedly blocked by ISPs, however. The block’s effects were still being felt in the early hours of Nov. 6.

TunnelBear now seems to be blocked in #Turkey, along with other VPN services https://t.co/5A2Dr7Sbf3

A developer prepared a list of more VPN services that do not keep logs, based on Torrent Freak’s yearly review, and The Pirate Party tweeted a guide on bypassing VPN blocks.

As one of the most resilient tools against government censorship, many rights activists are pointing to tutorials on how to install and use Tor, such as the Turkish Security In A Box guide prepared by Tactical Technology Collective and the Electronic Frontier Federation’s Surveillance Self-Defence in Turkish. Tor Project’s Nima Fatemi also offered a visual guide to users from Turkey to overcome government’s blocking by using Tor bridges.

If you're in #Turkey use this method to get back online. Pass it around to people who need it over whatever social media you think they use. pic.twitter.com/7crPRT8Ied

The Turkish government is currently drafting a bill for an even more authoritarian presidential system under Recep Tayyip Erdoğan, using the coup attempt as a pretext. Academics remark that this sudden crackdown on the opposition is tactical, similar to the “shock and awe” doctrine, aiming to intimidate dissenters and overwhelm protesters. But despite Erdoğan’s powerful tools to control the situation, internet activists’ self-defense experience from other authoritarian regimes are evidently punching holes in Turkey’s own great firewall.