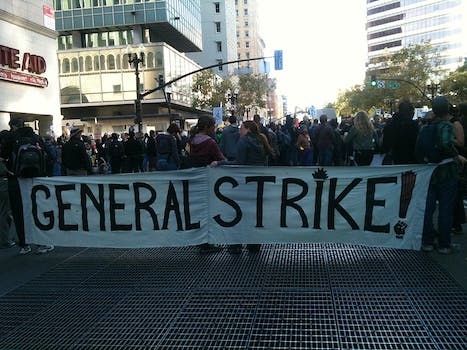 Tumblr users aren’t happy with the site’s latest update—which is more or less the same thing you could say for the previous update, and the one before that.

But this time Tumblr bloggers aren’t simply turning to third-party extensions like XKit to block out the changes, they’re actually going on strike. Well, some of them are, anyway.

The new update’s most noticeable change was to the dashboard, where users see new posts from all the blogs they follow. The biggest complaint was over the image display box being enlarged from 500 pixels to 540 pixels.

This may not sound like a big deal until you realize that Tumblr has long been the go-to blogging service for artists, graphic designers, and fans who like to make GIFs of their favorite TV shows and movies. Thanks to the new update, all images and GIFs designed for the original 500 pixel Tumblr dash have been resized, reducing the image quality. On top of this, many users have been complaining of dashboard glitches and slow loading speeds.

Something had to be done, and since the Tumblr staff didn’t seem to suitably interested in people’s complaints, blogger farewelleleven suggested a strike.

“So I say we pick a day, let’s say Monday, November 3rd,” wrote farewelleleven, “and make sure NOT to go on Tumblr all day (midnight to midnight). Of course, this may not work, but if a large number of people were to stop using Tumblr for a day, it would show on the website’s traffic. Maybe that would get their attention at last.“

The post has gotten a healthy 41,000 notes so far, but there’s no guarantee that all of those Tumblr users are agreeing with it. If you go on the Tumblr Strike tag you’re equally likely to see people arguing with the idea, from one person saying the strike “is really immature and you’re just throwing a childish fit” to “I’ve been around long enough to know that a mere 24 hours away from Tumblr won’t make the least bit of difference.”

Really, the main thing to take away from all this is the number of notes on all these posts. Aside from the original post suggesting the strike, most of these discussions look relatively small. It’s difficult to imagine that the strike gained enough traction to make a dent in Tumblr’s daily traffic, although more than 48,000 people have signed a Change.org petition to reverse the dashboard update.

There are also some intriguing conspiracy theories going around, including the baffling idea that Tumblr’s parent company, Yahoo!, wants to “get rid of” people who post photos and graphics so they can turn the site into a video platform instead.

This idea is linked to a Fortune article that discusses the site’s recent decision to emphasize video content and revamp its video player. However, the article itself points out that Tumblr is first and foremost a blogging site, and “The video activity on Tumblr has historically come from embeds from YouTube and Vimeo, rather than videos that are uploaded directly to Tumblr.”

In response to a popular post suggesting this conspiracy theory, one blogger derisively replied, “you are using the illuminati pyramid to sharpen occams razor here.”

Tumblr may be attempting to improve its video functions, but it’s difficult to believe it’s trying to turn into the next YouTube. First of all Tumblr’s video player is notoriously glitchy, but more importantly video only makes up a fraction of the content on the site. A far more likely explanation is that Tumblr just wants more people to upload video through its own player instead of embedding clips through other sites.

It’s also worth remembering that Tumblr users are annoyed by almost every new update, so there doesn’t have to be a nefarious reason for why the new dashboard is so inconvenient. If you want a plausible explanation for why Tumblr decided to resize its image posts, look no further than the announcement on their staff blog last week: “Wider posts: We went ahead and did it. There was no reason not to.”