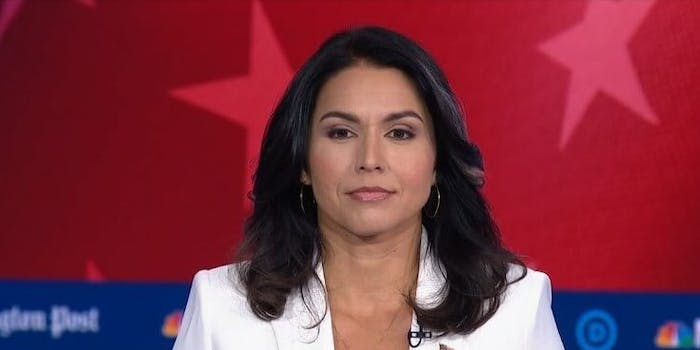 Gabbard was asked about her spat over the past month with Hillary Clinton, who called her a Russian asset. In the wake of that, Gabbard called Clinton a warmonger, accusing her of being everything wrong with the Democratic party.

And Gabbard decided to go with an attack on the entire Democratic party.

“Our Democratic party, unfortunately, is not of, by, and for the people. It is a party … that continues to be influenced by the foreign policy establishment represented by Hillary Clinton… by the military-industrial complex, and other corporate interests.”

It was a line of criticism Gabbard has frequently hit the establishment with. And while her calling out Dems in the primary earned a vicious response from Sen. Kamala Harris (D-Calif.), who noted Gabbard’s ties to Fox News and Steve Bannon, one group enjoyed Gabbard’s comments.

Trump’s 2020 campaign, which shared them almost immediately on Twitter.

💯"Our Democratic Party, unfortunately, is not the party that is of, by and for the people." #DemDebate pic.twitter.com/B8Lq8i1NrR

Gabbard has long been the favorite of conservatives in every debate so far, and it looks like Wednesday is no different.