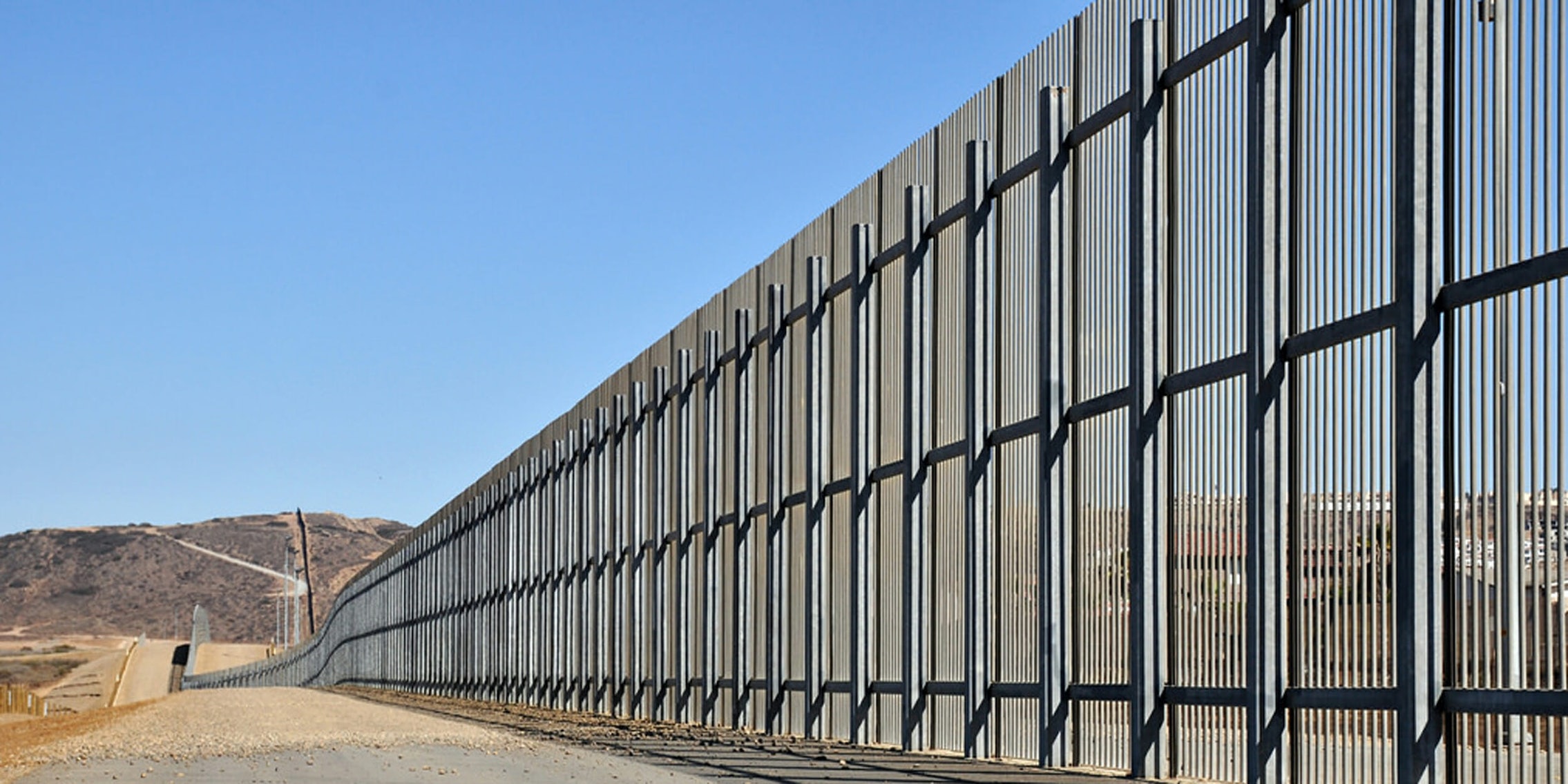 Why Trump’s border wall will never get built

It's a fever dream.

This refrain, ubiquitous on the campaign trail, will likely go down as one of the emptiest promises in American political history. Not only is there not going to be a wall, but there was never going to be a wall, at least not as President Donald Trump’s supporters imagined it. Trump’s base was led to believe a physical barrier spanning the entirety of the U.S.-Mexico border was a cornerstone of the president’s campaign. This idea was so central that supporters even came to his campaign events dressed as the wall.

Trump indulged his xenophobic constituency throughout the election season, but once he took office, he immediately started walking back his impossible promise. Though he has generally continued to insist that there will be a “big, beautiful wall” on Twitter, the reality is that his administration has long been prepping for their supporters for the eventual announcement that the wall isn’t going to happen.

The latest step towards, “The wall was inside you all along,” came on Wednesday when Senate Majority Leader Chuck Schumer (D-N.Y.) took the border wall “off the table” following a budget compromise earlier in the week that left many in the Democratic Party cold.

This pronouncement from Schumer didn’t stop the White House from issuing firm immigration terms on Thursday that appeal neither to the Democratic or Republican base, but, of course, include funding for the wall. The Trump administration released a take it or leave it proposal that would offer amnesty to DACA recipients in exchange for $25 billion in funding for the wall and other hardline immigration policies. The plan, drafted by immigration hardliner Stephen Miller, was instantly deemed unpopular by both sides of the aisle. One Democratic strategist called it a “white supremacist wish list.”

Even with that salvo, it is becoming increasingly apparent that there is never going to be a wall. If funding is ultimately allocated for a wall, it likely won’t come anywhere near the $25 billion that would be required to build the kind of “big, beautiful” wall that Trump has imagined. Last week, Chief of Staff John Kelly downplayed the wall, admitting that President Trump was not “fully informed” on immigration policy when he was on the campaign trail. The comments, made during a meeting with Democratic lawmakers, seemed to be one of the last steps towards abandoning what was once Trump’s signature project.

After finding out about Kelly’s comments, Trump took to Twitter to defend the wall, but even in doing so, included some concessions that were not mentioned on the campaign trail, including admitting that there will be no segments of the wall in areas with “natural protections” and areas of the wall that will be “see through.”

The Wall is the Wall, it has never changed or evolved from the first day I conceived of it. Parts will be, of necessity, see through and it was never intended to be built in areas where there is natural protection such as mountains, wastelands or tough rivers or water…..

While the wall has been popular among Trump’s base, it has never enjoyed widespread support in Washington. Various Trump Administration officials and surrogates have taken turns downplaying the wall over the last year. Republicans haven’t even been able to come up with a budget proposal that could adequately fund it. Though the duty of walking back the idea of the wall has now fallen primarily to Kelly, backsliding is nothing new for the Trump White House. Trump’s team has been walking back the wall, both as a physical entity and a concept, since they took up residence on Pennsylvania Avenue.

In fact, Trump actually started changing his policy on the wall before he officially took office. In early January, before the inauguration, he began altering his position. Though he initially said Mexico would pay for the wall, he started to say that Mexico would pay America back instead.

The compromises only continued from there. As the time came to begin allocating money for the wall, the administration could only find $20 million out of an estimated $20 billion needed for the wall in the Homeland Security budget. This was enough to construct eight prototypes—in what amounts to a very expensive art installation that Infowars loves—but in the scope of government budgeting, this is not a serious financial commitment.

Once these potential budget numbers floated out into the public, various experts, from geologists to engineers started weighing in. A number of experts introduced such credible challenges to Trump’s plan that even Fox News had to take notice. For example, one geologist told Smithsonian Magazine, “In some places, the bedrock will be too deep—you’ll never be able to reach the bedrock in an affordable fashion.”

Trump fired back at the number and the experts by insisting that his involvement alone would curtail the costs.

I am reading that the great border WALL will cost more than the government originally thought, but I have not gotten involved in the…..

…design or negotiations yet. When I do, just like with the F-35 FighterJet or the Air Force One Program, price will come WAY DOWN!

In March, Trump’s White House released their budget blueprint. Even in their ideal budget, there was only $2.6 billion for the wall. This only covered about ten percent of the wall’s estimated cost.

By April, Trump’s rhetoric started to reflect his diminished budget ambitions. He tweeted that the wall would be built, eventually.

Eventually, but at a later date so we can get started early, Mexico will be paying, in some form, for the badly needed border wall.

This did not go over well with his base. As a potential shutdown approached towards the end of April, Trump took an aggressive, blustering stance toward the wall. President Trump threatened to shut down the government if he did not receive funding for the wall (which he did again last week). This quickly failed.

Rather than deepening support for the wall, Trump’s brinksmanship actually set him back. While immigration hawks on the far right want to continue ramping up deportations and increasing funding for ICE, even they came out against an actual wall. Around the time of Trump’s failed gambit, Senator Ron Johnson (R-Wisc.) called the wall a “metaphor.” Senator Lindsey Graham (R-S.C.) spoke of the wall as “a code word for better border security.”

The wall was out of headline news for several months after Trump’s massive April failure. The House managed to include $1.6 billion for funding a border wall in a massive spending bill, but even that has been rejected by the Senate several times between late summer and early fall.

After these stalled efforts, even Trump’s most ardent supporters started to make peace with the idea that the wall may only exist in Trump’s mind. In September, Fox and Friends began to muse about the idea of the wall being no more than an idea. By November, Trump himself started adopting some of the moderating language long employed by his surrogates. He told 60 Minutes, “For certain areas, I would (have a fence) but certain areas, a wall is more appropriate. I’m very good at this—it’s called construction.”

As if things couldn’t get worse for the wall, a December report from the Texas Tribune and ProPublica found that a massive amount of land had been bullied away from private citizens on the border for previous projects under other administrations. It turns out that eminent domain has been used recklessly on the border for years. This report further turned citizens and local lawmakers near the border against the wall, and will likely make it more difficult to pull off, as building a full border wall would be mean more aggressive use of eminent domain.

It remains to be seen what further compromises and contradictions happen around the wall, but one thing is for sure. When Trump says he “has never changed or evolved on the wall,” the only way he is telling the truth is if he never intended to build the wall in the first place.