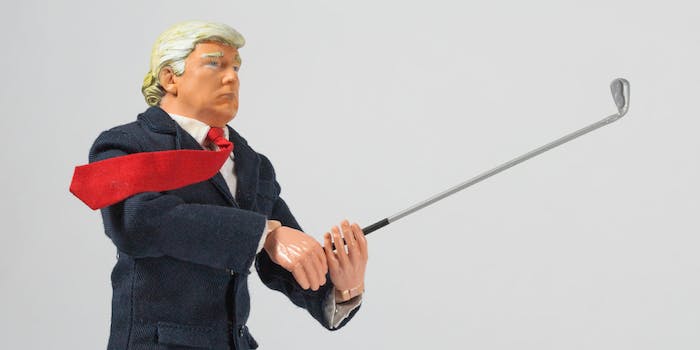 Today, the Washington Post dropped a story about President Donald Trump having a $50,000 golf simulator installed in the White House that allows him to “play virtual rounds at courses all over the world by hitting a ball into a large video screen.”

Naturally, there was a mass freak-out over America’s commander-in-chief using a golf simulator.

The reactions ran the gamut from declarations that this was how Trump used his “executive time” to the standard “conservatives would freak out if Obama did this” to concerns over how Trump was wasting taxpayer money.

If Obama had done this, Fox and the right-wing echo chamber would be going ballistic and cover it non-stop for days. https://t.co/yqXwNrWHT3

That's what his "Executive Time" is.

.@realDonaldTrump paid $50K for a golf room in the .@WhiteHouse. Keep this in mind, #MAGA #MAGA2020 when you file your taxes as a result of the #GOPTaxScam #GOPTaxSCAMStories #TaxReturn https://t.co/QRH0Ek27l7

Except all of them are basically bunk.

As noted in the second paragraph, former President Barack Obama was the first person to have a golf simulator installed. This was an upgrade to that. The Post article notes that Trump paid for it himself. It goes on to mention how many other presidents shaped the White House to make time for their personal habits, including adding movie theaters and bowling alleys.

And as noted by some, if he’s using this in lieu of taking a motorcade out to a golf course, he might be curbing his obscene taxpayer spending on his golf obsession.