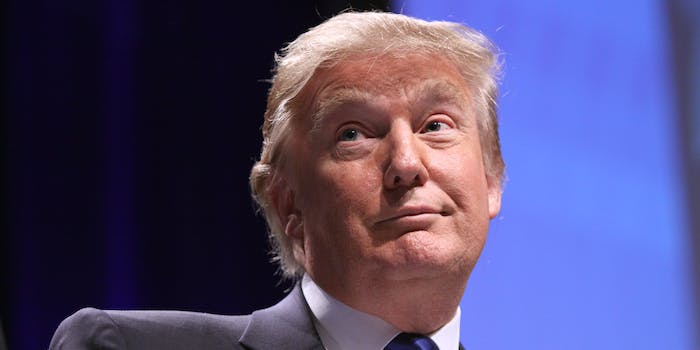 He once described it as 'one of the worst trade deals.'

President Donald Trump instructed his top advisors to begin exploring how the U.S. could join the Trans-Pacific Partnership (TPP) on Thursday, just one year after abandoning the trade pact he’d blasted throughout his presidential campaign as a “horrible deal” and a “disaster.”

“The president multiple times reaffirmed in general to all of us and looked right at Larry Kudlow and said, ‘Larry, go get it done,'” Sen. Ben Sasse (R-Neb.) said to reporters.

The move represents a surprising U-turn on one of the president’s most consistent policy points: international trade. Trump has always boasted that he preferred bilateral trade agreements that could be leveraged to the benefit of the U.S. and American workers. He has consistently criticized multilateral trade pacts, like the TPP, as a threat to American manufacturing industries.

The Trans-Pacific Partnership is an attack on America's business. It does not stop Japan's currency manipulation. This is a bad deal.

Although Trump’s Democratic rival during the 2016 election, Hillary Clinton, had also publicly opposed TPP, the Obama administration had considered the then-12 nation partnership a key policy objective.

Commitment to the pact was by no means a partisan issue. In fact, in February, a letter from 25 congressional Republicans had been delivered to Trump asking that he “re-engage” with the TPP.

“We encourage you to work aggressively to secure reforms that would allow the United States to join the agreement,” the senators wrote at the time. “Increased economic engagement with the 11 nations currently in TPP has the potential to substantially improve the competitiveness of U.S. businesses, support millions of U.S. jobs, increase U.S. exports, increase wages, fully unleash America’s energy potential, and benefit consumers.”

That letter was ignored, and in March, 11 countries from across the Pacific, excluding China, signed the agreement which will create a new single market that represents 40 percent of the global economic output. The agreement will standardize tariffs and regulation in a way similar to the European Union.

As tensions rise with China over tariffs, it looks like the president might be having second thoughts.