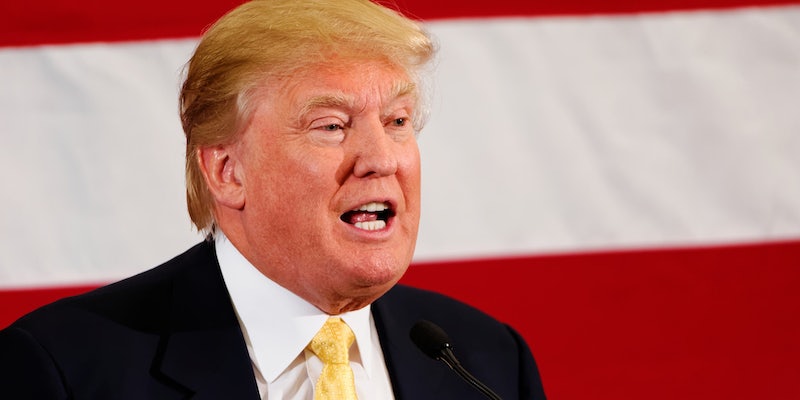 Trump wants the public to know, again, that he is not racist.

Following the public uproar about Donald Trump and his incendiary statements about a federal judge, Trump walked back his remarks Tuesday, saying that, though one’s heritage shouldn’t disqualify that person from being impartial, he feels “justified in questioning whether I am receiving a fair trial.”

Trump had caused a public uproar regarding his comments about Judge Gonzalo Curiel, and he’s questioned whether he is receiving a fair trial with a judge “of Mexican heritage” who’s also a member of a Latino lawyers’ association.

According to Trump’s press release, he stated:

“It is unfortunate that my comments have been misconstrued as a categorical attack against people of Mexican heritage. I am friends with and employ thousands of people of Mexican and Hispanic descent.
The American justice system relies on fair and impartial judges. All judges should be held to that standard. I do not feel that one’s heritage makes them incapable of being impartial, but, based on the rulings that I have received in the Trump University civil case, I feel justified in questioning whether I am receiving a fair trial.”

The statement went on to defend Trump University, providing three positive student testimonies out of a total of more than 10,000 surveys that can be viewed publicly online.

In an interview during CNN’s State of the Union on Sunday, Trump said, “[Curiel] is giving us very unfair rulings, rulings that people can’t even believe. This case should have ended years ago on summary judgment.”

That was only the latest attack from Trump on Curiel.

I have a judge in the Trump University civil case, Gonzalo Curiel (San Diego), who is very unfair. An Obama pick. Totally biased-hates Trump

I should have easily won the Trump University case on summary judgement but have a judge, Gonzalo Curiel, who is totally biased against me.

Curiel was born an American citizen in Indiana to Mexican immigrants, creating, what Trump said, is an “inherent conflict of interest,” due to Trump’s campaign policies regarding immigration and the construction of a wall along the U.S.-Mexico border.

Toward the end of Trump’s press release, he expressed his concerns of receiving “unfair and mistaken rulings in this case” and tied it together with Curiel’s association with “certain professional organizations.” Curiel has been associated with the La Raza Lawyers of California organization.

We reached out to the Republican National Committee and did not receive a response for a request to comment.