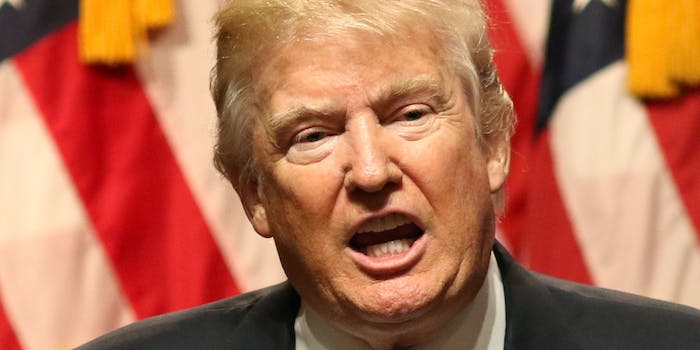 President Donald Trump on Thursday morning said on Twitter that Iran is “on notice” following its recent ballistic missile test, which some claim was in breach of a United Nations resolution.

Trump also commented that Tehran should be “thankful” for the “life-line” nuclear deal the United States and other international powers extended to the Middle Eastern nation in 2015.

Iran has been formally PUT ON NOTICE for firing a ballistic missile.Should have been thankful for the terrible deal the U.S. made with them!

Iran was on its last legs and ready to collapse until the U.S. came along and gave it a life-line in the form of the Iran Deal: $150 billion

Trump’s tweets reiterate the formal position expressed by the president’s national security advisor, Michael Flynn, on Wednesday evening in a press conference. Flynn said that the White House condemned “actions by Iran that undermine security, prosperity, and stability throughout and beyond the Middle East that puts American lives at risk.”

“Iran is now feeling emboldened,” Flynn, an army veteran, told reporters. “As of today, we are officially putting Iran on notice.”

Iran has fired a number of test missiles since signing the 2015 nuclear deal, but the launch on Sunday was the first since Trump’s inauguration. Officials from both the U.S. and Israel initially called out the test as a violation of U.N. resolution 2231, which demands that Iran not conduct such tests.

The Trump administration’s response appears to be part of a hard-line approach toward the Islamic republic. Flynn went on to criticize President Barack Obama’s previous stance by contrast.

“The Obama administration failed to respond adequately to Tehran’s malign actions—including weapons transfers, support for terrorism and other violation of international norms,” continued Flynn, taking the opportunity to criticize the former president’s own strategy.

Under the condition of anonymity, a senior U.S. official reportedly told Reuters that Trump is “in the process of evaluating the strategic options” that include economic sanctions, and that the administration was in the midst of reconsidering its posture toward Iran.