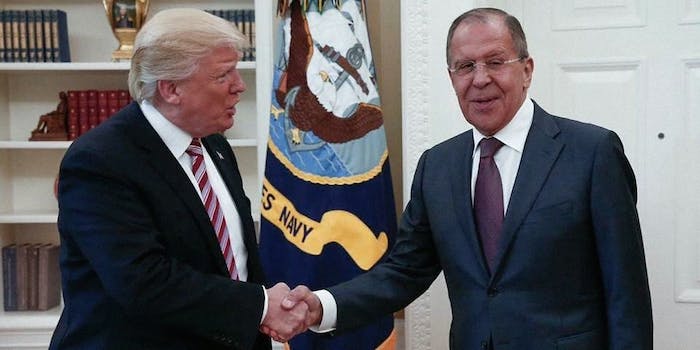 It's much less sensational than it appears, according to the president.

President Donald Trump on Tuesday morning confirmed that he shared intelligence in a meeting with Russian officials last week and defended doing so as necessary for security.

In a pair of tweets, the president pointed to a rather benign explanation of his conversation about terrorism with the Russians, stating that he shared “facts pertaining to terrorism and airline flight safety.”

As President I wanted to share with Russia (at an openly scheduled W.H. meeting) which I have the absolute right to do, facts pertaining….

…to terrorism and airline flight safety. Humanitarian reasons, plus I want Russia to greatly step up their fight against ISIS & terrorism.

Trump’s rather anodyne defense was in direct contrast to some reports, which said the information he shared was highly classified. A source for BuzzFeed called the disclosure “far worse than what has already been reported.”

According to U.S. officials, who spoke to Washington Post journalists under the cover of anonymity, the president went “off script” at the meeting and shared top secret information about the so-called Islamic State—information so sensitive that it is reported that the U.S. has not even shared it with close allies. Disclosing the classified information, which was obtained by a U.S. intelligence partner, threatens international information-sharing partnerships that are considered crucial to national and global security.

The allegations made in the Post’s scoop were explosive. Republican and Democratic senators demanded the White House give a “full explanation of the facts.”

If true, this is a slap in the face to the intel community. Risking sources & methods is inexcusable, particularly with the Russians. https://t.co/CRiSC024F7

The White House dismissed the report as “false,” a statement which was corroborated by the Russian Foreign Ministry.

However, the decision by Trump to tweet out a defense of his actions calls into question denials issued by his White House the night before. Trump’s national security adviser, H.R. McMaster, originally called the report false.

Trump, in his campaign for the presidency, was highly critical of anyone improperly sharing classified information.

Clarification: While Trump confirmed that he shared intelligence that appears to match the descriptions from multiple reports, the president did not confirm that the information he shared was classified.