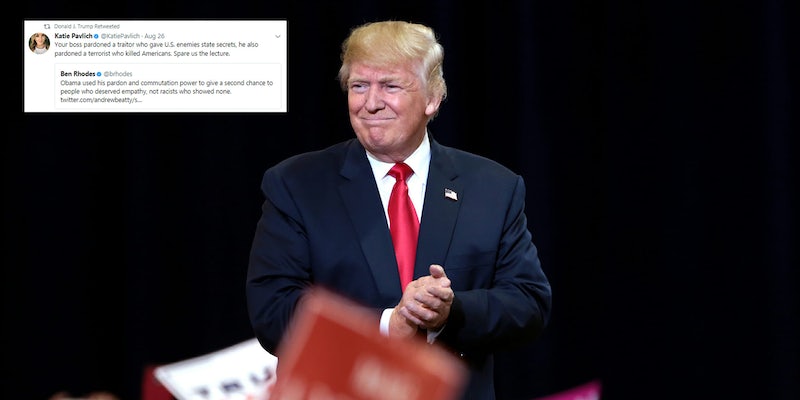 There's a difference between a pardon and commutation.

President Donald Trump may need a refresher on what exactly a presidential pardon is.

The retweet in question came from Katie Pavlich, a Fox News contributor, who was disagreeing with Ben Rhodes, a former foreign policy adviser in the Obama administration.

Trump apparently found Pavlich’s defense compelling, as he has received backlash for pardoning Sheriff Joe Arpaio, who was found guilty of criminal contempt of court for not ending a racial profiling practice he instituted while in office.

Pavlich told Rhodes: “Your boss pardoned a traitor who gave U.S. enemies state secrets, he also pardoned a terrorist who killed Americans. Spare us the lecture.”

Your boss pardoned a traitor who gave U.S. enemies state secrets, he also pardoned a terrorist who killed Americans. Spare us the lecture. https://t.co/90jZcPXYqx

Pavlich was likely referring to Chelsea Manning, the former U.S. Army soldier who was convicted of leaking military documents, and Oscar Lopez Rivera, the former leader of a Puerto Rican paramilitary group.

Neither Manning or Rivera were pardoned by Obama, though. Obama commuted their sentences, allowing them to leave prison before the end of their sentences. A pardon, such as the one Trump gave to Arpaio, absolves someone of their convictions.

“Criminal leaker—you’ve heard the word leaker?” Trump said during the press conference. “President Obama commuted the sentence of Chelsea Manning, who leaked countless sensitive and classified documents to WikiLeaks, perhaps and others, but horrible, horrible thing that he did—commuted the sentence and perhaps pardoned.”