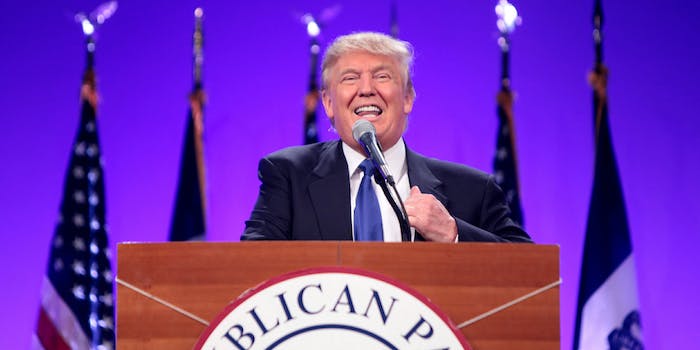 Leaks apparently don't count when they come from Fox News.

President Donald Trump hates when classified information leaks to the news media—except, apparently, when it is leaked to his favorite news outlet.

The retweet was one of several comments the president has made about North Korea on his Twitter account in recent days—including one where he also attacked the media.

The Fake News Media will not talk about the importance of the United Nations Security Council's 15-0 vote in favor of sanctions on N. Korea!

After many years of failure,countries are coming together to finally address the dangers posed by North Korea. We must be tough & decisive!

The information was given to Fox News by “U.S. officials with knowledge of the latest intelligence in the region,” the kind of anonymous source that Trump has repeatedly assailed media outlets for using in their reports of his administration.

Trump has ordered the Justice Department to crack down on leakers in an attempt to prevent information like the type found in the Fox News report from becoming public.

Sessions said the Justice Department would bring criminal charges against leakers of classified information and the Federal Bureau of Investigation had dedicated considerable resources to creating a new counterintelligence unit that would specialize in investigating leaks.

“I strongly agree with the president and condemn in the strongest terms the staggering number of leaks undermining the ability of our government to protect this country,” Sessions said.