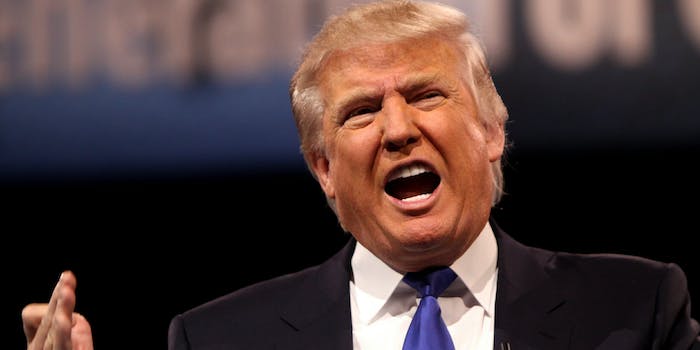 Trump made his threat at his golf club in New Jersey.

President Donald Trump vowed to retaliate against North Korea on Tuesday afternoon, promising “fire and fury” if the country continues to threaten the United States.

“North Korea best not make any more threats to the United States,” Trump said at his golf club in New Jersey. “They will be met with fire and fury like the world has never seen.”

Trump said North Korean Leader Kim Jong-un has been “very threatening beyond a normal statement,” presumably referring to statements the county made after the United Nations levied sanctions against Kim’s regime amid their continued testing of nuclear weapons.

North Korea threatened retaliation against the United States following the sanctions that are aimed at pressuring the secluded country into negotiating a de-escalation of its nuclear militarization.

Intensifying fears of a looming nuclear conflict with North Korea, the country has successfully created a miniaturized nuclear weapon capable of fitting inside a missile, according to a secret Defense Intelligence Agency assessment reviewed by the Washington Post. Experts estimate that North Korea has between 30 and 60 nuclear warheads.

Trump’s remarks come a week and a half after North Korea launched an intercontinental ballistic missile into the waters off Japan’s coast.

On Tuesday morning ,Trump said the United States needed to be “tough & decisive” about the “dangers posed” by the country in an early-morning tweet. On Monday, Trump chided the “fake news media” for not talking about the United Nations’ sanctions, despite numerous outlets reporting on it.

Also on Tuesday, Trump retweeted a Fox News story based on classified information about North Korea, despite Trump ordering the Justice Department to crack down on leakers within his administration.

Update 6:57pm CT, Aug. 8: North Korea has now threatened to strike Guam, an American territory that houses the Naval Base Guam and Andersen Air Force Base.

BREAKING: North Korea says it is examining its plans for attacking Guam to contain U.S. bases there.