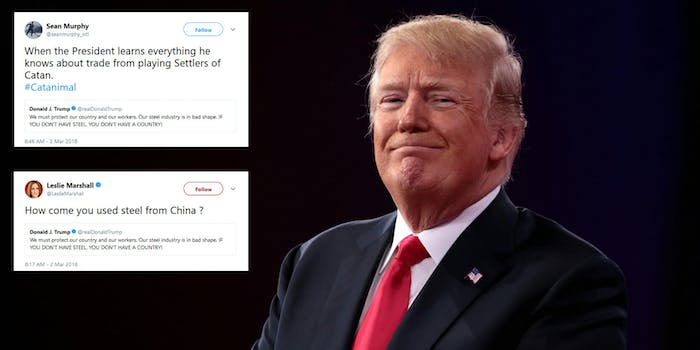 There were a lot of references to Settlers of Catan.

President Donald Trump knows the most important factor for having a country: steel.

The president made the bizarre declaration on Friday morning, presumably responding to criticism of his decision to place hefty tariffs on foreign steel and aluminum.

“What’s been allowed to go on for decades is disgraceful, it’s disgraceful,” Trump said on Thursday shortly after announcing his plan.

Following Trump’s announcement, the stock market fell more than 400 points, with shares of several major companies like Ford and General Motors dropping as a result of the announcement, according to CNBC.

But the president tried to shrug off fears of a trade war by declaring that they are “good, and easy to win” in a tweet on Friday.

The response to Trump’s tariffs has not been met kindly by all conservatives. The right-leaning editorial board of the Wall Street Journal called the plan the “biggest policy blunder of his presidency.”

“This tax increase will punish American workers, invite retaliation that will harm U.S. exports, divide his political coalition at home, anger allies abroad, and undermine his tax and regulatory reforms,” the paper’s editorial on Friday read.

But the biggest pushback seemed to be happening on Twitter. Many people quickly pointed out that Trump reportedly used foreign steel for several of his properties in the past.

How come you used steel from China ? https://t.co/wIfHK2nTSM

Says the man who has built in the US with Chinese steel because it was cheaper. https://t.co/7VgDApyuRn

They also found the president’s suggestion that without steel, you can’t have a country quite baffling—with some speculating he learned about trade from playing board games.

FACT CHECK: It is actually possible to not manufacture steel and still have a countryhttps://t.co/vPgycq6ERz

For what it's worth, this strategy works wonders in Settlers of Catan https://t.co/fvWtzBMxii

Settlers of Catan is basically a trade war. And that's fun. So Trump must be right.

This message brought to you, not surprisingly, by the year 1953. https://t.co/QuJj3UlNJO

When the President learns everything he knows about trade from playing Settlers of Catan.#Catanimal https://t.co/oqOM6Zqhv2

However, there’s no chance Trump has ever played Settlers of Catan.