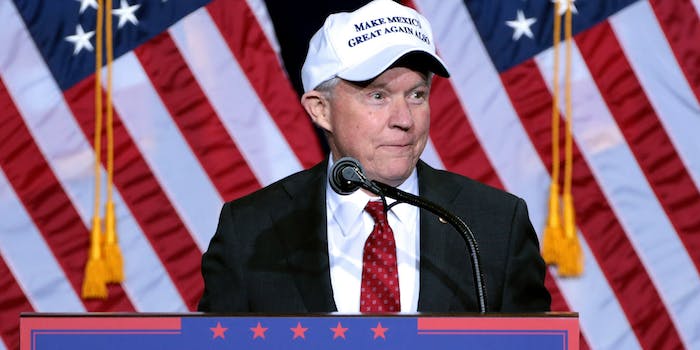 Trump's bullying of his attorney general continues for the third day in a row.

President Donald Trump on Wednesday continued his public humiliation campaign against Attorney General Jeff Sessions, criticizing him for not firing the acting director of the FBI.

Why didn't A.G. Sessions replace Acting FBI Director Andrew McCabe, a Comey friend who was in charge of Clinton investigation but got….

…big dollars ($700,000) for his wife's political run from Hillary Clinton and her representatives. Drain the Swamp!

Trump has repeatedly attacked Sessions over the past week, suggesting that he is a disappointing attorney general who fails to do his job. Sessions, who was the first member of Congress to endorse Trump’s candidacy, has led some of the most effective—if controversial—policy efforts of the Trump administration, including his crackdown on illegal immigration and other “law and order” policies.

The president’s criticisms of Sessions began in earnest with a New York Times interview during which he said he would not have nominated the former Alabama senator had he known he would recuse himself from the Department of Justice investigation into Russia’s attempts to interfere in the 2016 election:

Trump repeated the attack on Sessions during a White House press conference this week, saying that he is “very disappointed” in his attorney general.

President Trump on Jeff Sessions: "I am disappointed in the Attorney General." https://t.co/vLYQ1upSkr pic.twitter.com/7ziugClzPh

Sessions recused himself in March after reports revealed that he misled senators about his contacts with Russia’s ambassador during the 2016 campaign.

The president has since nominated Chris Wray, assistant attorney general for former President George W. Bush, as the next FBI director. The Senate has not yet approved his appointment.

Trump’s attacks against Sessions have reportedly created a rift between the two men, who, according to Politico, are no longer on speaking terms. However, the president’s public attempt to push Sessions to resign remains ineffective, and the attorney general has vowed to hold onto his post until Trump fires him.

White House aides are, according to CNN, urging Trump to stop bullying Sessions. Those efforts apparently have not yet been effective.